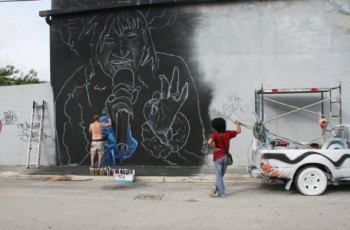 Southbound, organizers have gained control of the RC Cola plant courtesy of Metro I Properties, where more than 80 Primary Flight artists are slated to paint its interiors and exterior (550 NW 24th Street, Miami). To the north, Primary Flight will also be growing into the Design District, developing murals on both sides of the Tuttle Wall on Biscayne Boulevard at 36th Street.

Primary Flight, the Wynwood Arts District Association, and the City of Miami anticipate inducting 30+ murals into the inaugural Wynwood Mural Museum (wynwoodmuralmuseum.org). Murals erected in the last four years and iconic pieces that have since been covered will be featured on a map dedicated to street art and on the official website, to be unveiled during Art Basel.

About Primary Flight
Primary Flight is a collaborative curatorial organization dedicated to the production of site-specific, street level, mural installations. Since its inception in 2007, Primary Flight has brought together more than 150 of the worldâ€™s most influential artists to install their bodies of work live in the streets of Wynwood, the Design District and greater Miami-Dade. These projects often function as a catalyst for developing arts communities. For more information please visit www.primaryflight.com.