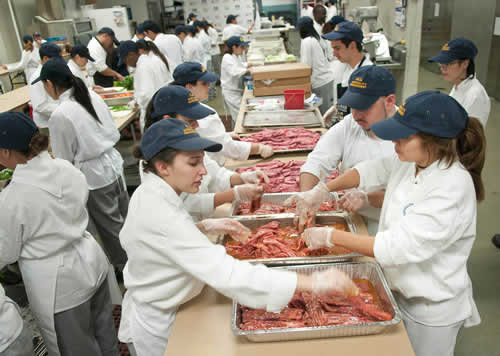 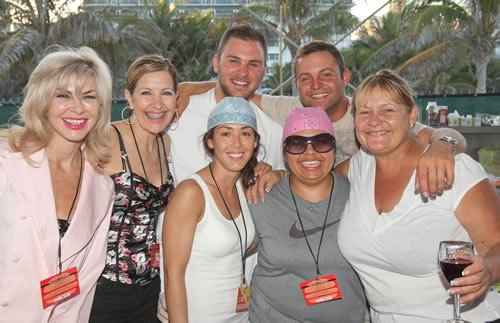 Over 1000 FIU students are involved in every aspect of the event – from serving student made wine & beer to soliciting restaurants for the Grand Tastings to making and keeping the event Green, to sponsor fulfillment, logistics as it relates to loading in and breaking down to prepping, working side-by-side cooking for such illustrious chefs as Bobby Flay, Michelle Bernstein, Lidia Bastianich, David Burke, Scott Conant, Laurent Tourandel, Alfred Portale as well as celebrity chefs such as Rachael Ray, Paula Deen, Michael Symon, among others for a variety of events including Bubble Q BBQ, Best of the Best, and the Grand Tasting tents.

The students play an integral and a pivotal role in producing the nation’s largest such event in N. America, with over 55,000 tickets sold over the 4 day weekend in Feb. Almost $2 mil. dollars was raised last year, with $400,000 dollars earmarked for student scholarships.

For the 2010 Festival celebrity chefs and personalities such as Rachael Ray, Emeril Lagasse, Ming Tsai, Paula Dean, Bobby Flay, Michael Lomonaco joined famed South Florida based chefs such as Michelle Bernstein, Kenny Lyon, Michael Schwartz, Jonathan Eismann and Allen Susser â€“ to name just a handful of participants — to once again position Miami-Dade County as the culinary capital of the world during the festival. Everyone is drawn to the event, not just for the celebration, but also for the opportunity to benefit one of the leading hospitality programs of its kind in the world.

Formerly known as the â€œFlorida Extravaganzaâ€, proceeds from the South Beach Wine & Food Festival benefit FIUâ€™s School of Hospitality. Over the past 10 years, over a $6 million dollars has been raised to enhance the students experience at the School of Hospitality by expanding the School of Hospitality Teaching Restaurant and the Southern Wine & Spirits Beverage Management Center. Hundreds of thousands of dollars were set aside for student scholarships.
In addition to lending their services to the cause of benefiting FIUâ€™s School of Hospitality, many chefs worked with numerous students individually, offer the students an unparalleled experience. At this year’s Festival, students will be paired with, in a mentorship style relationship, the following chefs: John Besh (Restaurant August, New Orleans), Scott Conant/Michael Priolo (Scarpetta/ Miami Beach), Todd English (Olives, NYC), Adam Perry Lang (Daisy Mayâ€™s BBQ, NYC), Emeril Lagasse (Emerilâ€™s/New Orleans), Masaharu Morimoto (Morimoto, NYC), Tom Neely (Neelyâ€™s Bar-B-Que, Memphis), Alfred Portale/John Suley (Gotham Steak, Miami Beach), Sue Zemanick (Gatreauâ€™s, New Orleans), among others.
â€œThe students of FIU are the real winners of this festival. They provide tireless support for the four-day weekend of events while reaping indispensable real world industry experience,â€ says Joan Remington, Interim Dean, FIU School of Hospitality.
FIU Hospitality Management senior AJ Mindermann, assistant culinary manager at the 2009 festival, knows first hand the value of working with industry leaders in a real-world experience. â€œThe experience is priceless,â€ Mindermann said. â€œYou canâ€™t put a number on it. I got so many internship opportunities from chefs last year. The networking is terrific. Itâ€™s probably one of the biggest career-jumpers there is.â€
Having just completed his second year in a leadership role at the Festival, Arthur was honored with the Barilla Best FIU Student Chef Award, and a $1500 cash prize. Barilla established this award to recognize students at FIUâ€™s School of Hospitality and who exhibit their commitment to and passion for the culinary arts.
Hundreds of other students benefit from real-world experience at the Festival. Experiences range from fulfilling thousands of ticket orders to restaurant solicitation, sponsorship fulfillment to meeting and greeting guests at myriad activities throughout the annual four-day festival. Overall, some 850 Hospitality majors â€“ most with excellent internship experience already under their belts â€“ worked in a variety of key capacities both before and during the festival.

Itâ€™s little wonder that so many famed names are willing to lend their time and expertise to the festival and to FIU students. Hospitality and tourism industry executives from around the world visit the school annually to interview and hire graduates for key management-track positions in the vast array of fields in which FIUâ€™s students are prepared. Today many of the schoolâ€™s 9,000 graduates hold prominent positions in the hospitality industry around the Western Hemisphere, Europe and Asia.

Students at FIUâ€™s School of Hospitality are highly sought-after for key reasons. One is the comprehensive curriculum that includes tracks for Bachelor and Master of Science degrees in Hospitality Management, Executive Master of Science in Hospitality Management Degree Programs, PhD in Business Administration as well as Certificate Programs in various Hotel, Restaurant, Hospitality, Travel and Tourism specializations. Over 100 courses and 35 expert faculty members focus exclusively on hospitality and tourism management including finance, law, beverage management, culinary arts and hotel operations.

FIUâ€™s excellence was one reason student Caroline Karlberg chose it when she decided to leave the world of finance for logistics management.

â€œI wanted real, hands-on experience and that was definitely something FIUâ€™s School of Hospitality, offered in addition to its programs and staff,â€ Karlberg said. â€œI canâ€™t believe this, but last year at this time, I was a financial analyst in New York City. And this year I am a graduate student at FIU School of Hospitality, working as a member of the Food Network South Beach Wine & Food Festivalâ€™s logistics team, the largest such event in the country.â€ Caroline, assistant to SoBe W&F Logistics Manager Susan Gladstone, is also Student Associate Coordinator, working with her team of students to place 1000 students in various jobs at the festival.

â€œAnd what I have learned is unbelievable: just the amount of moving parts and people it takes to put together such an event is mind-blowing. I have never been on this side of an event, and I had no idea what goes into the back-end. Working this event has helped me appreciate all special events.â€

â€œWe provide our students the opportunity to get their foot in the door in the hospitality field of their choice,â€ said Dean Remington, FIU School of Hospitality. â€œOur students work on the ground, having real life experiences while making important contacts with industry leaders. It is gratifying to the faculty to know that international hospitality companies and corporations are selecting our students.â€

It is also reason why, year after year, top figures in the industry are eager to help contribute to FIUâ€™s School of Hospitality.

When FIU chef-instructor Michael Moran puts on a party, he wants only the best at his side. Take the high-profile Food Network South Beach Wine & Food Festival, presented by Food and Wine Magazine, the wildly popular, FIU-co-sponsored event that takes place from Feb. 25-28, 2010. As chef and culinary coordinator he’ll rub elbows with some of the biggest names in the industry, among them Food Network chefs Emeril Lagasse and Bobby Flay. It’s his own students, however, that Moran considers critical to success.

â€œIt really is about finding a core of people who have this tremendous passion,â€ Moran says of the hundreds or so undergraduates who sign on for his course in â€œquantity food production.â€ In addition to other chores, the students take direct responsibility for getting ready all of the mea consumed during the 2009 Bubble Q BBQ: 1800 pounds of pork, 1500 pounds of beef filet, 1000 pounds of chicken, 1200 pounds of fish, 800 pounds of cabbage, and turning out several hundred pounds of nouveau potato salad, cole slaw and other side dishes for arguably the festival’s most glamorous attraction: the Friday night, champagne-drenched barbecue for over 3,000.

It took 3500 man hours to prepare 22,500 portions of food served to 3400 people attending the 2009 Bubble Q BBQ. Ordered were three tons of food for the 25 participating chefs, each preparing 900 portions.

The prep work takes place in the Miami Beach Convention Centerâ€™s hot and cold commercial kitchens, after which the food is packed into four refrigerated, 65-foot 18-wheelers and delivered to the fashionable Delano hotel on Miami Beach . There the students assist a veritable Who’s Who of professional chefs from around the country as they help cook and serve the ultimate outdoor feast.

Overall, some 850 Hospitality majorsâ€”most with excellent internship experience already under their beltsâ€”will work in a variety of key capacities both before and during the festival, from fulfilling thousands of ticket orders to meeting and greeting guests at myriad activities throughout the long weekend, among them wine and food seminars and a celebrity golf tournament.

For the most part, Chef Moran is educating not just would-be chefs, but the future managers of restaurant groups, hotel chains, cruise lines and related companiesâ€”this is a business school, after all. Moran wants to make sure his charges know how to bake chocolate chip cookies, prepare relatively simple dishes like arroz con pollo and, by the end of the semester, quickly build an entire dinner around ingredients he hands them in class. His self-stated goal: â€œI have to take away the intimidation of the kitchen.â€ Come festival time, they’re usually ready for anything.

But it’s not just cooking the veteran chef covers. â€œI’m teaching the whole individual,â€ explains Moran, who trains students how to work together, respond quickly to commands and generally get comfortable with the frenetic pace often associated with meeting the public’s expectations.
At the 2009 Festival, students were paired with in a mentorship style the following chefs: John Besh (Restaurant August, New Orleans), Kenny Callaghan (Blue Smoke, NYC), Todd English (Olives, NYC), Roger Herring (Socca/Chicago), Elizabeth Karmel (Hill Country/NYC) Adam Perry Lang (Daisy Mayâ€™s BBQ, NYC), Emeril Lagasse (Emerilâ€™s/New Orleans), Tim Love (Lonesome Dove Western Bistro/Ft. Worth), Missy Robbins (A Voce/NYC), Aaron Sanchez (Centrico/NYC), among others.
Chef Moran who has an established relationship with Miamiâ€™s Daily Food Bank, was able to, with his team, recover 6495 pounds of food from the 2009 Bubble Q, Burger Bash and the Grand Tasting demos, which translates to 38,970 meals. â€œThis is truly incredible!!â€ exclaimed Chef Moran. â€œSo much more than double last year. Iâ€™m proud that the food was not wasted, and that so many people were able to eat their fill of fine home-made food.â€

Almost $2 million dollars was raised for FIU School of Hospitality to award student scholarships, and to enhance the experience of students by investing in program, faculty and facility enhancement.

With partner Southern Wine & Spirits of Florida, a division of the country’s largest beverage distributor, FIU presents the Food Network South Beach Wine & Food Festival annually as a fundraiser in support of its Teaching Restaurant Program and the Southern Wine & Spirits Beverage Management Center, both located on FIU’s Biscayne Bay Campus in North Miami . The event also provides an opportunity for the nationally ranked School and its students to contribute to South Florida ‘s reputation as a world-class travel destination and a great place to live.

â€œWe’re part of the community. We want to make the community more successful,â€ Moran says. â€œOne of the things we can bring to the table is the planning and creation of an environment to have a great time.â€