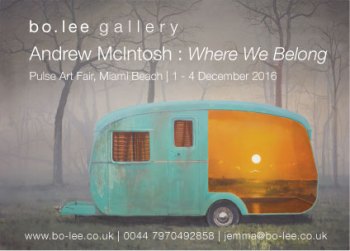 London based bo.lee brings the eerie Scottish Highlands to sunny Miami Beach in a beautiful pairing which reflects McIntoshâ€™s new body of work â€˜Where We Belongâ€™.
Born in Scotland in 1979, for his latest body of works, Where We Belong (2016), Andrew McIntosh has returned to the landscape that surrounds his family home which he got to know intimately while growing up. In his trademark painterly realist style and with a subdued, earthy palette, the artist depicts beautifully atmospheric locations from marshy moorlands to misty woodlands and ice-capped hills.

But these are not simply haunting Highland landscapes, however, as clearly present within each scene is an old caravan, some of which might have been manufactured half a century ago or more. Situated in picturesque spots but seemingly abandoned and without a human in sight, these somewhat dishevelled caravans appear both strangely incongruous yet somehow completely at home. Glowing with the warmth of the setting sun, the caravans become transformed into mysterious portals to other places and other times, suggesting that metaphysics, science-fiction or the paranormal might not be far away.

Fans of Westerns might spot that several of the landscapes depicted inside the caravans are scenes from classic movies of this genre. It is as if McIntosh is drawing both a comparison and a contrast between the picturesque beauty of the landscape in which he grew up and that of the American Midwest. Both are places that inspire the romantic imaginary: dreams of travel and escape, of leading different kinds of lives.

Indeed, this new body of work might be read as a metaphor for faded or failed dreams of adventure, of journeying to places far from home, or back in time to places we once knew. While they are wistful, eerie and melancholic paintings, with their golden sunset scenes they are not devoid of hope, and maybe, just maybe, these caravans have not yet reached their final destinations.