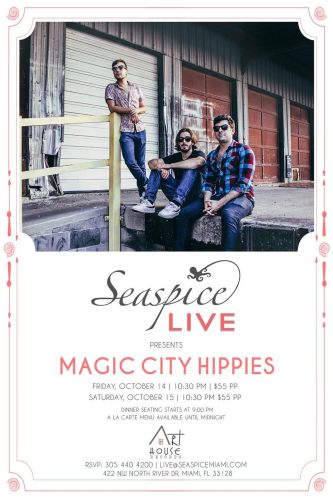 MAGIC CITY HIPPIESâ€™ signature indie funk will enliven guests at Seaspice Brasserie & Lounge this weekend on Friday, October 14, and Saturday, October 15, at 10:30 pm. The indie bandâ€™s performance is part of Seaspice Liveâ€™s lineup, which includes some of the most promising artist in the industry in collaboration with Art House Records, from eight time Grammy award-winning producer/composer Julio Reyes Copello, (Ricky Martin, Marc Anthony, Jennifer Lopez, Alejandro Sanz, Il Divo, Laura Pausini and Nelly Furtado). During the season, the exclusive venue, located on the banks of the Miami River, is hosting an array of internationally acclaimed musicians every Friday and Saturday at 10:30 pm in its new sound engineered, state of the art stage.

The Miami-based Indie Funk band, previously known as The Robby Hunter Band, has hints of hip-hop, soul and has been widely acclaimed internationally since the debut of their first LP in 2013. The Hype Machine-topper “CorazÃ³n,” alongside â€œHard On Me” and “BUST,â€ gave them their initial success with audiences. In July of 2015, Magic City Hippies released the Hippie Castle EP, and the lead-off track “Fanfare” that hit number one on Spotify’s Global Viral Top 50 and has over 2.7 million streams to date. Magic City Hippies released their latest single, “Heart Wants,” a Beach-Boys-inspired throwback, during the course of well-attended Reddit AMA. You can enjoy all their hits live this weekend at Seaspice.