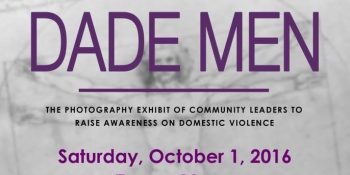 Yeelen Gallery
294 NW 54th St
Miami, Florida 33127
Tickets in advance: $25, At the door $50
Buy Tickets on EventBrite
To join the movement or ask any questions about DADE MEN or the Millennials Project’s work, email us at info@millennialsproject.org

DADE MEN is a series of photo exhibitions highlighting prominent and enlightened Miami men. The exhibition was launched on October 1st, 2015 in order to raise awareness on gender-based violence, elevate the collaboration of local communities in this pervasive issues, and make Miami safer for women and girls.

Through this exhibit in addition to related workshops and events, we at the Millennials Project want to mobilize 25,000 men in the next years as supporters and allies in what we consider the most important social movement of our generation: the movement to end all forms of violence against women.

All Proceeds Will Support Violence Prevention Initiatives And Girls Education In Haiti.