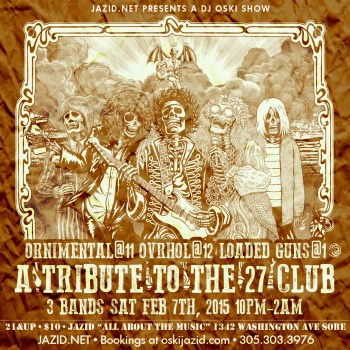 A Tribute To The 27 Club
Featuring:

“The 27 Club” or “Club 27” is the colloquial name given to a group of influential rock musicians that died at the young age of 27. There are a few “members” who are always listed in “27 Club” groupings – such as Jimi Hendrix, Jim Morrison and Kurt Cobain, and more recently Amy Winehouse – while other musicians who were 27 at the time of their death are included sporadically, depending on who has composed the list (another term for this club-that-nobody-wants-to join is the Forever 27 club).Though the official causes of death for these famous people vary between the different musicians – from suicide to overdoses on sleeping pills to, yes, choking to death on vomit – drug and alcohol abuse is often cited as a primary cause behind many of these deaths. Everyone on this list will never turn 28 â€“ they will be forever 27.

Hip-Hop Flavor upstairs with DJ Fiyah Vibez til 5am.