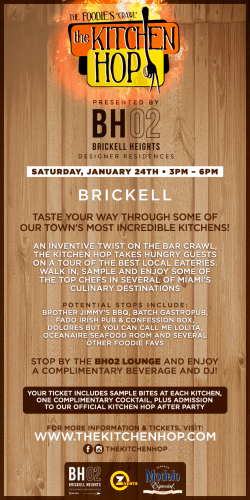 The Kitchen Hop Presented by Brickell Heights 02, Designer Residences is returning to Brickell, giving foodies much to bite on with over 10 of Brickellâ€™s best kitchens. Z Events CEO Javi Zayas, creator of Kitchen Hop, launched the event in 2014 becoming the first one-of-a-kind culinary experience that features cuisines from all around the world and gives a spin on the customary bar crawl.

The Kitchen Hop Food Crawl commences its series of events for 2015 at Mary Brickell Village, bringing it back to Brickell. The ultimate foodieâ€™s crawl will be taking place January 24 from 3-6 p.m. Guests will tour Brickellâ€™s top eateries, sampling delicious bites and giving their palate a little bit of Mexican, Italian, Greek & American dishes handpicked by the top chefs of each kitchen.

â€œWe are excited to return to Brickell. The Kitchen Hop Series returns this year bigger than ever. We have many fan favorite restaurants returning and we added new spots that have recently opened, giving guests the first taste to some of the best eateries Brickell has to offerâ€œ Said Javi Zayas, Z Events CEO

Each participant will join the crawl by sampling chefâ€™s top selections, discovering culinary gems one taste at a time. This event includes over 10 participating restaurants including: La Mancha Restaurant, Segafredo, Oceanaire, Dolores but you can call me Lolita, Batch Gastropub, Fado Irish Pub, Brother Jimmyâ€™s BBQ, L’ Entrecote de Paris, Power Pizzeria, La Mexicana Cantina, American Social, Blue Martini and many more. Guests will also have exclusive drink specials throughout the day and a chance to unwind at the Brickell Heights 02, Designer Residences Lounge. The party doesnâ€™t end at 6 p.m. though! Guests will also be invited to keep the festivities going at Blue Martini, the official Kitchen Hop after party. Kitchen Hop guests will be granted a complimentary cocktail at Blue Martini to help start their night off right.

For tickets and more information please visit www.thekitchenhop.com. Tickets are $36. Mary Brickell Village is located at 900 South Miami Avenue Miami, Florida 33130 Parking will be provided by Park Jockey a one touch parking app, book your parking in advance and spend more time eating!