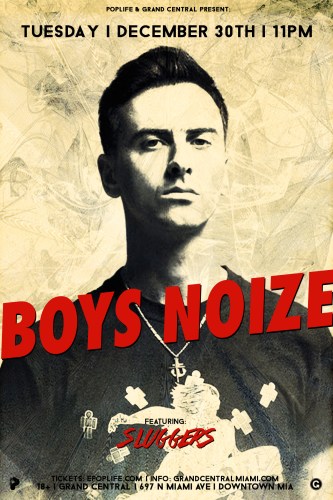 We welcome Boys Noize back to Grand Central.

Alex Ridha – better known to the world as Boys Noize – has been making electronic music and working as a DJ for over half of his life.
He established himself as one of the worldâ€™s preeminent wizards behind the decks, having played the worldâ€™s biggest stages alongside the biggest names in dance music.
His sets are equally uplifting, not only technically but also as a showman, leaving unforgettable experiences for the witnesses. One of the reasons why the Rolling Stone voted Boys Noize amongst the Top10 `DJs who rule the earth` in 2012.

As a recording artist and producer, Ridha has created his own sound, and pioneered his own brand, amassing a formidable body of work in the process.
He has released three albums (2007â€™s Oi Oi Oi , 2009â€™s Power and 2012Â´s Out Of The Black) and countless singles as Boys Noize, as well as doing profoundly influential work as a remixer and producer for everyone from Depeche Mode, Daft Punk, Feist, David Lynch to Jarvis Cocker, Santigold, Scissor Sisters and Chilly Gonzales.

He has collaborated with Snoop Dogg, genius film maker Mr. Oizo (on a project called Handbraekes), Erol Alkan, and most recently Skrillex (under the moniker of Dog Blood) and won Beatport’s ‘Best Electronic Act’ 3 years in a row.

Ridha is also the heart of Boysnoize Records, the label that he started back in 2005. Founded originally as a means to get his own music out into the world, Boysnoize Rec.â€”and itâ€™s sub-label, BNR Traxâ€”is now home to more than a dozen artists (including up-and-comers like 18-year old SCNTST, Le1f, Spank Rock, Strip Steve, Peaches and Siriusmo) and responsible for over 100 releases while remaining fully independent.
“I donÂ´t compromise when it comes to music,â€ says Ridha. â€œI do what I think is cool and what I like and not what the market wants or people may expect. Maintaining artistic freedom has always been the most important thing to me â€” for my own music and for anyone on my labelâ€

Despite his ever-expanding label roster and the increased demand for his time as a producer and remixer, Ridhaâ€™s primary loves continue to be the twin pursuits of making and performing music.
Following the release of his third long-player Out Of The Black in late 2012, he presented the first Boys Noize ‘Live’ show to the masses.
â€œI really wanted to give people a concert where I perform my music only. ItÂ´s not that I donÂ´t like DJing anymore, IÂ´m a DJ to the bone and will always be. But playing my tracks live and putting on a completely new show was something I wanted to do for a long time. ItÂ´s different and fresh and that is what I love.”