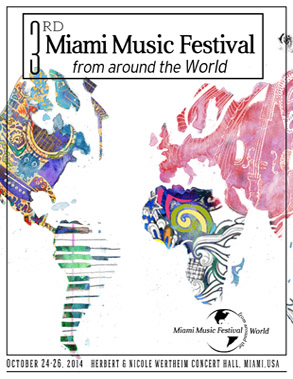 As a celebration of the cultural diversity of the city and the musical richness that exists around the world, South Florida Friends of Classical Music presents the 3rd Edition of the Miami Music Festival from Around the World.

The South Florida Friends of Classical Music, announces the third edition of â€œMiami Music Festival from Around the World” (formerly known as Miami World Music Festival) which will take place from October, 24 to 26, in the Wertheim Center for the Performing Arts of the Florida International University (FIU).

The 2014 Festival, under its new name, will embark on an international sonic adventure. Four shows in which music lovers will come together to enjoy a wide scope of musical expressions ranging from well-known opera arias to the vibrant African rhythms and explosive piano duels.

This year the festival, under the artistic direction of Dr. Adolfo Vidal, has brought together both musicians of great experience and international recognition as new talents.

On Saturday, after a sold-out at the last festival Venus Rising returns with a new show: “One Pulse, Many Beats” a mixture of dance, rhythms and sounds from Africa, the Caribbean, Brazil and the Middle East.

On Sunday a double round of concerts begins with a spectacular journey through the world of opera. “Women in Opera” features five sopranos and mezzo-sopranos singing ravishing duos, trios, recognized arias.

The festival closes with the “Monster Piano Explosion,” a marathon of solos, four-hand throw-downs, two pianos duels and other surprises that will blow your senses, with 20 accomplished pianists from the South of Florida.