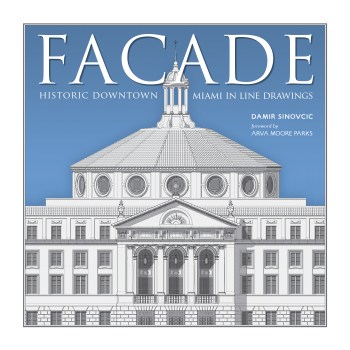 Facade: Historic Downtown Miami in Line Drawings, by author Damir Sinovcic, is a portrait of the architecture and development of Miami’s city center and its vicinity during the early twentieth century. Though many buildings erected during that period have been demolished or significantly altered over time, some of the most prominent structures still remain. Based on the book, the Miami Center for Architecture and Design, along with the Downtown Development Authority and author Damir Sinovcic, have created an exhibition that depicts many of Miamiâ€™s historical buildings. Free viewing Monday thru Friday, 10am â€“ 5pm.

â€œFacade: Historic Downtown Miami in Line Drawings features downtown Miami buildings erected around the time of the Miami Land Boom. The bookâ€™s geographical focus encompasses the city center and neighborhoods north and east of the Miami River, as well as certain buildings north of the central business district, including Overtown and the neighborhoods near Biscayne Boulevard….

Over time, and often in the name of progress, many of Miamiâ€™s early twentieth century buildings have been demolished. Although this book could easily have been dedicated to all the great buildings that no longer exist, it celebrates those important structures that have endured.â€ â€“ Damir Sinovcic, Author