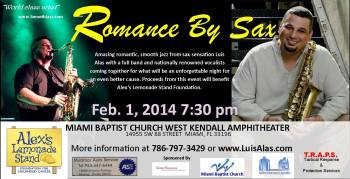 In an effort to join the battle against childhood cancer, South Florida smooth jazz artist Luis Alas will host a concert at the Miami Baptist Church West Kendall Amphitheater on Saturday, February 1, 2014 at 7:30 p.m. to benefit Stand Foundation, a 501 (3) non-profit organization started in memory of Alexandra “Alex” Scott, who succumbed to the disease in 2004.

“I have had a blessed life, not of money and wealth but of amazing opportunities and this talent which I always love to put it to use to help others,” shares Alas. “Cancer took my father from me and it was a tragic loss, but when I read about stories like Alexâ€™s and Bella it hurts me, not only the suffering the children go through, but of the parents, family and loved ones around them.”

Alas and a cast of amazing musicians and vocalists from around the country will be performing in a romantic, smooth jazz at the concert deemed “Romance by Sax.” He released two singles in 2013, one called “Mr. Magic” and the other instrumental remake of the pop ballad “Youâ€™re My Everything”, which got as high as #55 on the ReverbNation Jazz chart.

Alex’s Lemonade Stand Foundation (ALSF) emerged from the front yard lemonade stand of cancer patient Alexandra “Alex” Scott (1996-2004). In 2000, 4-year-old Alex announced that she wanted to hold a lemonade stand to raise money to help find a cure for all children with cancer. Since Alex held that first stand, the Foundation bearing her name has evolved into a national fundraising movement, complete with thousands of supporters across the country carrying on her legacy of hope.

To date, Alex’s Lemonade Stand Foundation (www.alexslemonade.org), a registered 501(c)3 charity, has raised more than $60 million toward fulfilling Alex’s dream of finding a cure, funding over 275 research projects nationally. Alas adds, “I felt I had to do something and teaming with Alex’s Lemonade Stand felt like the perfect fit so hopefully we can put an end to this horrific illness.” Tickets are $10 for general admission/ lawn seating, $20 for VIP (includes reception); military discount available â€“15% off with I.D.