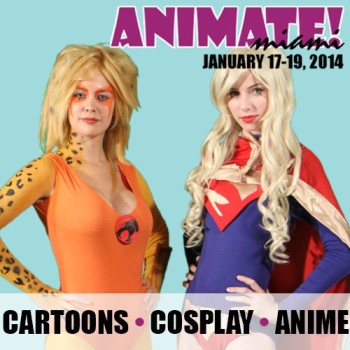 Animate! Miami is a three day festival dedicated to Anime, Animation, Cosplay, Video Games, and Comic Books that will take place January 17-19, 2014 at the Miami Airport Convention Center. Close to 10,000 fans are expected to converge for a full weekend celebration that will feature some of the animation and anime industries’ biggest names, world-famous cosplayers, top comic book artists, comedians, and entertainers. There will be hundreds of events, such as celebrity Q&A’s, costume contests, video games, comedy shows, Florida Super Championship Wrestling (the premiere cosplay wrestling federation), and much more!

Some of the highlights for Animate! Miami 2014 include:
Four of the stars from Adventure Time, including: John DiMaggio (Jake the Dog), Olivia Olson (Marceline), Jessica DiCicco (Flame Princess) and Dana Snyder (Ancient Sleeping Magi of Life Giving and The Train).
A cast reunion from the hit Anime series, Panty and Stocking with Garterbelt. Five of the stars from the show will be appearing, including: Jamie Marchi (Panty), Monica Rial (Stocking), Chris Sabat (Garterbelt), Ian Sinclair (Chuck), and Joel McDonald (Brief). This is the first time this many members of the shows cast have ever been together in Florida!
Heroes of Cosplay, the SyFy original TV series will be filming an episode at Animate! Miami, focusing on the Saturday night Costume Competition.
John DiMaggio, star of Adventure Time (Jake the Dog), Futurama (Bender), Gears of War (Marcus Fenix), Batman: The Brave and the Bold (Aquaman), and Batman: Under the Red Hood (The Joker).
Dana Snyder, star of Aqua Teen Hunger Force (Master Shake), Squidbillies (Granny), The Venture Bros. (The Alchemist), Chowder (Gazpacho), and The Thundermans (Dr. Colosso)
Three of the main cast members from the hit Anime series Dragon Ball, including the already mentioned Chris Sabat (Vegeta, Piccolo, Yamcha), Eric Vale (Trunks), and Monica Rial (Bulma).
The two main stars of the hit Anime series Michiko and Hatchin. Monica Rial (Michiko) and Jad Saxton (Hatchin).
Two of the main stars of the hit Anime series Sword Art Online and Madoka Magica. Christine Marie Cabanos and Cassandra Lee Morris.
Artists for Adventure Time, Regular Show, X-Men, Street Fighter, League of Legends, Spider-Man, The Avengers, and Superman.
Florida Super Championship Wrestling all 3 days, featuring amazing professional wrestlers in costume as your favorite cartoon and comic book stars.
Multiple costume and cosplay events each day of the show, with thousands of dollars in cash and prizes on the line!

Over 100,000 square feet of convention space featuring 250 booths and tables with vendors, celebrity guests, artists, filmmakers, and exhibits. 3 stages of entertainment, 15,000 square feet of video games, plus a dozen rooms for panels, tabletop gaming and screenings.

The final schedule is up, with nearly 300 events!