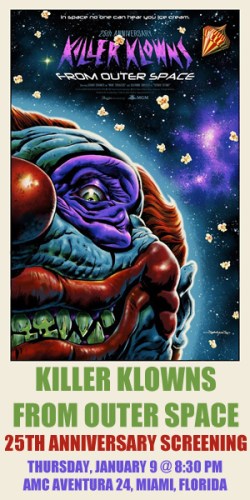 Join Keepitclassic.com & PopcornNights.com for an exclusive one-night-only screening of this so-bad-its-good 80’s classic. Over the past 25 years, “Killer Klowns from Outer Space” has developed a huge following on home video and late-night cable, having never received a wide theatrical release, we thought it would be quite awesome to celebrate its’ 25th anniversary with an event where we can all share in the Killer Klown awesomeness together. 2013 actually marked the film’s 25th Anniversary but since it was never released theatrically in Florida, we figured it would be a cool way to start out 2014.

Tickets can only be purchased through Tugg.com, not at the theater.