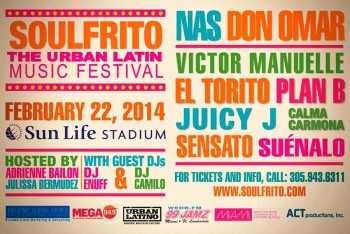 The full-day, multi-cultural celebration will be co-hosted by the popular recording artist, singer-songwriter, actress and television personality, Adrienne Bailon, together with the Dominican American presenter of Nuvo TV’s Stand and Deliver stand-up comedy show, Julissa Bermudez.

New York’s celebrated lyricist, political activist, actor and hip-hop mogul, NAS, will be performing alongside the Puerto Rican actor and King of reggaeton, Don Omar, as a tribute to the synthesis of U.S and Hispanic artistic expression that now forms part of today’s mainstream urban and pop music culture in America. Both artists will be making their inaugural concert appearance on the same stage during the nation’s 7th Annual Urban Latin Music Festival in South Florida.

Since its inception in 2002, Soulfrito The Urban Latin Music Festival has been the premier launch pad for emerging and established artists, as well as brands looking to connect with the multicultural U.S Hispanic audience that now forms today’s mainstream market. Soulfrito made an early contribution towards launching the careers of artists such as Pitbull, Wisin Y Yandel, Aventura and Kat Deluna. among others, and continues to provide an attractive platform for producers and brand partners that wish to engage second, third and fourth generation U.S Hispanics and enthusiasts of Urban Latin culture.