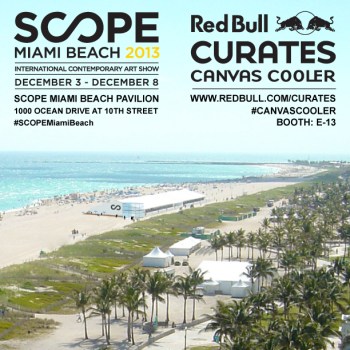 After a year-long nationwide series of competitive gallery showcases, the winners of Red Bull Curates: The Canvas Cooler Project are poised to exhibit and sell new pieces of their own works during a group show at SCOPE Art Show, the preeminent launching pad for emerging contemporary art, kicking off December 3 in Miami Beach.

Launched in January in San Francisco, the 2013 Red Bull Curates: The Canvas Cooler Project paired up-and-coming artists in six cities with local venue owners to create custom and functional pieces of art in some of the hottest bars, lounges and restaurants in each city. Artists were handpicked and given the challenge to transform a blank canvas-wrapped Red Bull cooler into an inspired work of art. The masterpieces were unveiled to the public in a one-night only local exhibition where gallery patrons and an esteemed panel of judges voted for their favorite pieces, ultimately awarding 2 artists in each city the coveted invitation to exhibit at SCOPE Miami Beach 2013.

Thirteen selections from the nationwide competition of galleries are participating in a career-changing event. The artists will be at the SCOPE First View on Tuesday, December 3 from 1pm-9pm, to discuss their showcased work with the press. For additional information, visit redbull.com/curates.