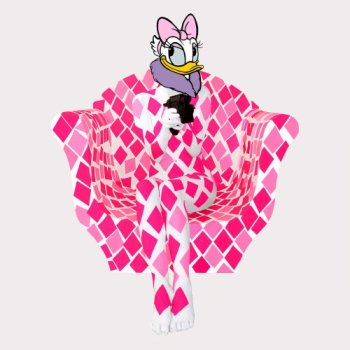 Miamiâ€™s Wynwood Art District is the home to more than fifty galleries, five museums, seven art complexes and many art fairs and studios. Global art lovers enjoy discovering this district and named it one of most stylish neighbourhoods in the world. SPECTRUM showcases the best innovative, contemporary art from 50 top galleries and 50 juried studios representing talented artists from around the globe. It is an important event for all serious collectors, curators, museum directors and interior designers, providing an intimate look at some of the most important work at the forefront of the international contemporary art movement.

A lifelong fascination with painting, body painting, performances, installations and photography shapes the work of Nicole Furman. The artworks of her series: Disney Fantasy Series, Hommage Series and Silhouette Series will be displayed in her individual booth No. 613 at SPECTRUM Miami.

In reviewing her artistic concepts, the Bogota based artist explains the meaning behind her Disney Fantasy Series: â€œUtilizing Disney characters as symbols of innocence, I seek to question its mere purity- of innocence, that is- discovering that innocence perhaps never was. Alongside, I play with the adult side of the â€œUltimate Fantasyâ€ that Disney symbolizes: with a nude body as my canvas and the satisfaction of fulfilling expectations: a proper woman and a macho man, deconstructed.

In regards to her other works she mentions: â€œThe Silhouette Series begins the search and exploration of feminine beauty (inside and out) finding it plagued with secret identities and insecurities. At the same time, it is a very personal and vulnerable journey, rendering my body and self as subject matter in various images. While in the Hommage Series I seek for my aesthetic within the pre-existent remembering that it is all a process of construction and reconstruction.â€

Nicole Furman lives and works in Bogota, Colombia. She enrolled in a two year IB Higher Level Art Program in Lima, Peru where she focused on body painting and short term performance. She also took art courses with a focus on Visual Studies and Art History at Brown University, Providence, RI and Photography, Printmaking and Oil Painting Courses at the Art Center of South Florida where she further developped her artistic career.

Nicole Furman participated in various art performance projects of former NYU Tisch Art Students and produced a number of performances and series of body paints of great artistic vision, original content and unprecedented style while living in both Lima and Providence. Amoungst her juried and curated solo shows it should mentioned, that her works were displayed at TOAF (The Other Art Fair)-London, Feria de Arte Odeon-Bogota and Preview Berlin Art Fair-Berlin. Nicole Furman is an emerging multi media artist and body painter. Throughout her career, she has presented a sustained, eloquent, and provocative exploration of the construction of male and female roles and identites drawn from the unlimited supply of images from movies, TV, magazines, fashion and art history.

Working with several third party models and herself as model, Nicole has captured herself and others in a range of guises and personas which are at times amusing and disturbing, distasteful and affecting. To create her photographs she assumes multiple roles. With an arsenal of wigs, costumes, masks, and most importantly, body paints, she has deftly altered the (painted) bodies physique of herself and others, and surroundings to create a myriad of intriguing tableaus and characters.

Highlighted in the exhibition are in-depth presentations of her key series, including the ground-breaking series “Disney Fantasyâ€ (2013), with photos of Minnie, Daisy, Donal Duck and Mickey which feature the painted bodies in non-stereotypical female or male roles â€“ or the Beautiful works from her Silhouettes Series (2012), her self portraits, that address the experience and representation of beauty, personal layers, self exploration, and mental emotion, in the context of contemporary obsessions with youth, status, reality â€“ and the miracle of our subconsciousness. Be careful. Shootinâ€™ Daisy is waiting in Wynwood District. Or inside yourself?