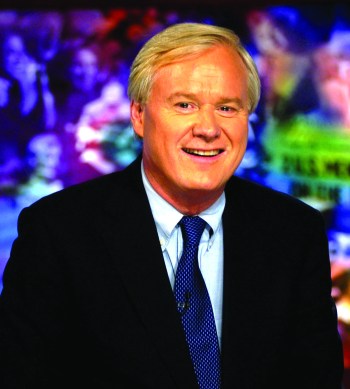 City Theatre will host an intimate business lunch with Chris Matthews, anchor of MSNBC’s “Hardball with Chris Matthews” and the NBC-syndicated “The Chris Matthews Show” on Monday, November 25, 2013. A television commentator with remarkable depth and breadth of experience, Mr. Matthews will share his in-depth political analysis, fiery opinions and sharp humor about politics, the arts, and his new book, â€œTip and the Gipper: When Politics Workedâ€.

Matthews has been following American politics since his teenage years and started working in the U.S. Senate after a term in the Peace Corps. He has worked as a presidential speechwriter in the White House and as top aide to Speaker of the House Thomas P. “Tip” O’Neill Jr. (D-Mass.).

In the late 1980s, Matthews switched to full-time journalism as Washington Bureau Chief for the San Francisco Examiner before turning his career to television. He launched “Hardball” in 1997 and the show has been on the air every weekday night since. In 2002, NBC premiered Sunday morning’s “The Chris Matthews Show.”

He’s the author of five best-selling books, in addition to the 2011 release “Jack Kennedy: Elusive Hero” and the featured book, a personal history about conservative President Ronald Reagan (served 1981-1989) and liberal Speaker Tip O’Neill. As a top aide to O’Neill, Matthews saw firsthand how the two political leaders forged compromises that shaped America’s future and became one of history’s most celebrated political pairings-the epitome of how ideological opposites can get things done.

For more information regarding this program, purchasing tickets or about City Theatre, please call (305) 755-9401.

About City Theatre
City Theatre is a professional theatre company founded in February 1996 and dedicated to the development and production of new work, specifically the short play format, featured in its award-winning annual Summer Shorts Festivals. Since its inception, the company has received over 15,000 national script submissions (with over 900 submitted for this season alone); produced over 375 original short plays by established playwrights and important new voices in the theatre; and brought together the largest ensemble annually of artists, actors, directors, designers, and production staff for programming that includes the annual Summer Shorts – Americaâ€™s Short Play Festival, The Festival Family Musical, Shorts 4 Kids Educational Tour and the CityWrights Conference.