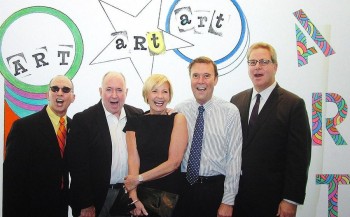 Last yearâ€™s Art Basel Week kicked off with a much talked-about tribute to Miamiâ€™s arts pioneers – alongside the cityâ€™s new cultural visionaries – with the retrospective of visionary artist Martin Kreloffâ€™s 1976 â€œMiami Says Artâ€ (which 36 years ago brought together the cityâ€™s then up-and-coming arts luminaries to look into his camera and exclaim â€œARTâ€). During last yearâ€™s Art Basel Week, Kreloff reunited cast members from his original 1976 show alongside Miamiâ€™s current crop of cultural champions, all coming together to help create a new time-capsule honoring Miamiâ€™s arts evolution, and providing a window into the cityâ€™s bright future as an art destination. The photos and resulting artwork have been kept under lock-and-key for a whole year, and the much-anticipated installation will be revealed for the first time at a preview reception for the media on Monday, December 2, at noon at the Mayfair Hotel in Coconut Grove.

The artist Martin Kreloff says: â€œAfter many years of living and working on the West Coast, Miami welcomed me back with open arms, as if it was urging me to return home … and what a homecoming it has become! From the sleepy burg I first encountered when I moved to Miami in 1967, the city has exploded into a vibrant and vital culturalÂ destination that pulsates with the glow of a world class art scene. Playing off the original concept of the 1976 show, we photographed Miami’s cultural and artistic leaders (both past and present) last year during Art Basel week, jubilantly proclaiming the word “ART!” From that jumping off point, I’ve taken the photos and added the playful, colorful psychedelic patterns that were utilized in the artwork from the 1976 show.Â Iâ€™ve also collaborated with Miami artist Gustavo Oviedo on a black box multimedia installation. What will this yearâ€™s Miami Says Art be like? All I can say is â€¦ Miami: You really know how to say ART!.â€ Said the General Manager of The Mayfair Hotel & Spa Miami, Axel Gasser: â€œThe Mayfair Hotel & Spa is proud to kick off Art Basel Week with Miami Says Art-2, also launching the Mayfair Hotelâ€™s 30th anniversary yearlong celebrations and recognizing Miamiâ€™s cultural history and the future of our art destination in true Mayfair style.â€