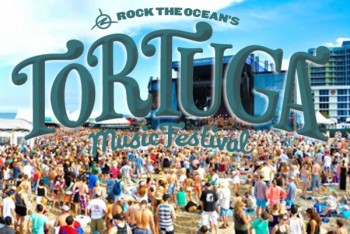 Tortuga Music Festival, produced and promoted by HUKA Entertainment, is a two-day music festival on the beach featuring nearly two dozen of the hottest artists in country, rock and roots music. Created together with the Rock the Ocean Foundation, the event serves to celebrate the festivalâ€™s ocean side setting while raising awareness of issues impacting the worldâ€™s oceans and supporting marine research and conservation.

â€œWeâ€™re incredibly excited to announce our return to the legendary white sands of Fort Lauderdaleâ€™s premiere beach,â€ says HUKA Entertainment co-founder and CEO A.J. Niland. â€œWeâ€™ve been fortunate to have the support of not only the community and fans but a tremendous response from artists as well, all of which is going to make us bigger and better in 2014.â€

â€œWhen I first dreamed a few years ago of an event that would celebrate the ocean via music, I never imagined it would turn into one of the leading music festivals in America,â€ adds Rock The Ocean founder Chris Stacey. â€œFort Lauderdale Beach on the majestic Atlantic Ocean is the perfect setting to remind everyone why the preservation of our waterways and marine life is so important.â€
Niland says 2014â€™s Tortuga Music Festival lineup will feature a lineup similar to its inaugural year, where over 25,000 festival attendees enjoyed headliners Kenny Chesney and Eric Church along with The Avett Brothers, Ben Harper and Charlie Musselwhite, Jake Owen, Lynryd Skynyrd, and many more.

â€œI canâ€™t imagine a better lineup in our first year than the one we had,â€ says Niland. â€œBut weâ€™re dedicated to making sure our next bill is even more impressive, if thatâ€™s possible, and have already confirmed top-caliber artists for 2014.â€

Anchored by live music performances across three stages, the centerpiece to Tortuga Music Festival is its Conservation Village, curated by Stacey, where over 20 organizations dedicated to marine research and conservation will provide interactive, educational experiences for festival patrons.

Stacey notes that the Conservation Village will likewise offer premium content in its sophomore outing, after featuring such notables as The Guy Harvey Ocean Foundation, Shark Savers, Sea Turtle Oversight Protection and nineteen other exhibits in year one. â€œGuy Harvey is a rock star in his own right, and it was such a pleasure to have him here in 2013 signing autographs and meeting fans in the village to discuss conservationâ€ says Stacey. â€œThatâ€™s a hard act to follow, so weâ€™re pulling out all the stops this time around.â€

Additionally, in 2013, festival-goers were encouraged to collect garbage at the event site to minimize the festivalâ€™s impact on the environment. â€œOver 1,000 bags were filled with waste by fans in our first year, which tells us that our cause is as important to music and ocean lovers as it is to us,â€ says Stacey.

â€œOne thing we heard repeatedly this year from both the artists and the fans was how much fun everyone had with their feet in the sand and the sound of the waves blending with the music,â€ says Niland. â€œThat makes it hard to forget who the true headliner of our event is â€“ the ocean â€“ and what we can do to make sure it returns every year.â€