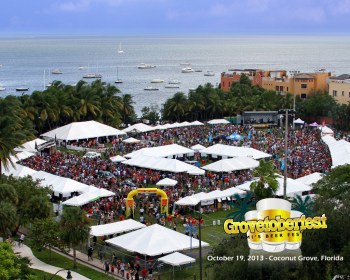 Not to be confused, Grovetoberfest is the largest beer festival in Florida! For the third year, Coconut Grove will be treated to 250+ craft beers from across the county and the world. Held seaside at Peacock Park, right in the heart of Miami, Grovetoberfest is said to be the “most scenic beer festival in the world”. Between 2:30 â€“ 7:00 p.m., beer lovers will take an active role in sampling and voting for favorite beers.

Interactive elements of the festival include an entertainment stage featuring live music, Brew F.I.Uâ€™s Beer Tasting 101, the Milamâ€™s Kitchen Lab hosted by some of South Floridaâ€™s popular chefs, a Resorts World Bimini VIP Lounge, Miamiâ€™s Best Homebrew Contest and the ever-popular Safe Ride Home option for those who sample more than they can handle. For ticket information, visit www.grovetoberfest.com or call(305) 461-2700.

â€¢ Over 250 Beers â€“ The list is quite impressive. American craft beer legends like New Belgium, Sierra Nevada, Abita, Bells, Sweetwater, Founder’s, Brooklyn and Goose Island, to name a few, will be present. Imports such as Duvel,
Chimay, New Castle and Magners will also be there. From a local standpoint, Cigar City, Wynwood Brewing, Miami Brewing, Funky Buddha and others will be representing.

â€¢ Your Vote Counts- Aficionados and the â€œcasual beer fanâ€ will take an active role in beer sampling by voting for their favorite beer in three categories â€“ Domestic, Import and Wild Card. The friendly competition will make it fun for all including the breweries that are eager to become â€œThe Top Beer of Choiceâ€ among consumers.

â€¢ Miamiâ€™s Best Homebrew Contest â€“ Home brewers will battle it out with their beerentries. South Florida breweries will judge these beers, and the winner will be announced at Grovetoberfest. He/she will not only have bragging rights, but their brew will be featured at a local restaurant/bar until supplies last.

â€¢ Bougainvilleaâ€™s Live Music Stage â€“Bougies Bar has booked Liza Quin + The Bureau to perform during the festival. Liza has been in the music industry for a long time; writing songs, recording back-up vocals, producing and singing alongside several successful artists such as Alejandro Sanz, Jon Secada, Ziggy Marley, Carlos Ponce, Gloria Estefan, Francisco Cespedes, and as a featured vocalist with Ricky Martin on his One Night Only tour and UnPlugged for MTV.

â€¢ Food Rowâ€“ A collection of the best beer-drinking food that money can buy.

â€¢ Safe Ride Home – Grovetoberfest will offer complimentary shuttle rides from the Metro Rail/Coconut Grove station to the event and back. Last shuttle leaves at 7:30 p.m.