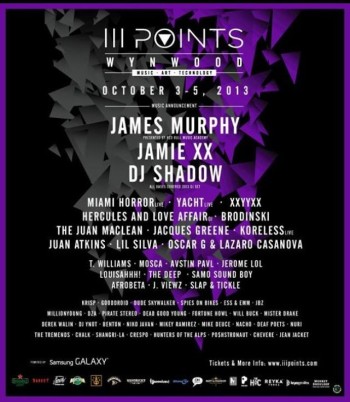 Set to run over three days (10/3 â€“ 10/5), III Points is going to bring to the area the most innovative and exceptional talents from the worlds of music, art, and technology. The event will take place in the burgeoning arts scene of the hip Wynwood neighborhood. The Wynwood-centric three-day summit will serve as a hub to a variety of III Point lectures, film screenings, art, interactive games, and seminars. Local art galleries will be participating with extended viewing hours. The artists involved will provide a sensory emersion between music, art, and technology.

III Points kicks off on Thursday night, when the city will be abuzz with kickoff performances including Miami Horror (live), Body High showcases, and other boutique launch events.

III Points recommences on Saturday with seminars by James Murphy, panel discussions, activities, games, gallery shows, and demonstrations scattered throughout the streets of Wynwood. III Points has partnered with The LAB Miami, whose mission is to be a platform for entrepreneurs, a campus for social innovation, tech and the arts.

DFA Records will host a BBQ as a lead-in to warehouse and club parties merging music, art, and technology throughout the city. Point Blank will close out III Points with a talent roster stacked with timeless innovators headlined by James Murphy, Jamie xx, Jacques Greene, Koreless and live art by TYPOE.

III Points has teamed up with TwinHaus, the Miami-based experimental engineering agency, to curate the art portion of the summit. TwinHaus, is the brainchild of Tara Long, who is a performance based installation and video artist, and partner Yamil Rodriguez, who is a musician and installation artist. The artists participating in III Points are predominantly local artists who have been working in South Florida before Wynwood and Art Basel influenced the local art culture. These artists have outlasted trends and gentrification, and continue to create quality materials and concepts that remain rich and intelligent. The majority of the art at III Points will be conceptualized, and installed specifically for this event. III points will activate satellite locations that will host the artistsâ€™ work. Some locations include Gramps, Cafeina, The Butcher Shop, Wynwood Cigar Factory, and many more.

On Friday and Saturday night, there will be a large installation around the main stage stage at Wynwood Cigar Factory integrating art and technology. There will be 3D projection mapping, a new technology which animates stationary objects with 3D video. Spearheading the 3D projection mapping is Jason Peterman with AV-8 Projects and Tecne Collective. Another performance, titled “The Drive-In” will be an interactive site specific performance involving movement, audio, and cars. Artists participating are Patricia Margarita Hernandez, Samantha Kruze, Ana Mendez, and Richard Vergez.

Throughout the weekend, guests will be able to download a specialized app or pick up a pamphlet with a map, artist downloads, videos, and media-related activities.

III Points is a partnership between legendary Miami club Bardot, and Young Turks (the label behind The xx and SBTRKT, among others), in conjunction with Jason Odio.

The Bardot team is composed of Wynwood pioneer Amir Ben-Zion, his partner, nightlife veteran Erica Freshman, and music director David Sinopoli. Bardot has been on the forefront of innovative bookings since its doors opened in 2009, playing host to Erykah Badu, Moby, Nicolas Jaar, Grimes, Purity Ring, Capital Cities, and Flume.

Young Turks describe themselves as a record label, among other things. Based in London, their talent roster boasts the hottest acts coming out of the United Kingdom. Featuring The xx, SBTRKT, John Talabot, Chairlift, and Sampha. Young Turks currently produce the Day & Night Festival in locations across Europe.