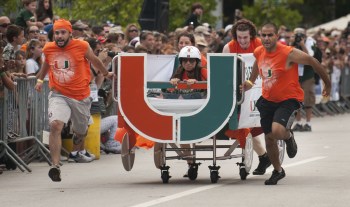 Announcing Dressed for Success as the official charity of the 2013 Great Grove Bed Race. The board of directors and subcommittee created for just this event promises to outdo itself in bed decor and dress and takes their racing as seriously as fundraising for their cause. Fortunately, Dressed for Success can now â€œsuit-upâ€ for the bed race. Five years of heated racing during peak hurricane season has blown the race â€“ permanently – to the first Sunday of November; a cooler and more appropriately â€˜suitedâ€™ time of the year. The Event producers and the Grove Merchant Group are simultaneously announcing the date move to cool down the overheated racers for the years to come.

Homemade beds race down the streets of Coconut Grove. The origins of bed racing date back three decades with this being the fifth anniversary of the Great Grove Bed Race with its Fast-Signs-fast-track and professional speed-way style play-by-play and on-site live radio with Celebrity Grand Marshall each year.

Proceeds go to Dress for Success Worldwide is an international non-profit organization dedicated to improving the lives of women located in more than 125 cities across 15 countries. They provide professional clothing, employment retention programs and ongoing support to their clients showing faith in every woman’s ability to be self-sufficient and successful in her career.

Announced today recording Artist and Rapper, Flo Rida, will get in bed with racers from across MIami Dade County as Grand Marshal for the â€œGreat Grove Bed Raceâ€. He joins celebrity judges, Mayor Thomas Regalado, local Miami Grammy winner Karina Iglesias of The Voice, and Commissioner Sarnoff for this yearâ€™s mattress madness. MCâ€™s of the bed-to-bed race offs is KVJ morning show of 97.3 FM the Coast. The 2013 competition of racing homemade beds through the streets of Coconut Grove will benefit Dress for Success Miami.

Born and raised in Miami, Flo Rida released his first album in 2008 that featured hit songs such as â€œLowâ€ featuring T-Pain and â€œRight Roundâ€ featuring Kesha. Both songs reached the top of the charts and held their position at number one for several weeks. His latest album â€œPerfect 10â€ will be released before the years end. Get ready to get down â€œLowâ€ with our Grand Marshal!

â€œI love my fans, so when I get the chance to interact with them, it’s beautiful.â€ said Flo Rida, â€œgrowing up in South Florida, I’ve always known, before I had a record deal, that the thing is to go out and put on the show. I’ve been doing that from day one and so have these race producers. I canâ€™t wait to be a part of the totally different kind of show.

The event will take place on Bayshore Drive by Peacock Park. Ingenuity has always been the key component of the races. Entries in recent years have depicted everything from a bed-ridden President Obama to last years top prizewinner a Victorian Themed bed by The Olfactory Company complete with white powder and wigs. Like any other 5k or tri-athalon for charity; the Bed Racers will fundraise beginning in August and throughout the fall season, with a 5-man race team and an additional 5-man pit crew, sending emails and encouraging attendees to sponsor and donate to their teams.

â€œWe are thrilled to have been selected as this years charitable beneficiaryâ€, said Board of Director President, Gailen David. â€œEach woman is a success story and a platform, like the bed race, lets us tell it in a truly unique and fun wayâ€.

The day starts with a family pajama party at 11 am with free games, Billy the Marlin, a kidâ€™s race course, interactive race games, acrobatic shows and music. Tickets to the Bed Race are just Five dollars for adults and kids 12 and under free all day. Live music starts on the main stage with a pre-race party zooming into a pit row parade where you can text your vote for Crowd Favorite, which will be the top prize of the day. Grand Marshal Flo Rida and Celebrity judges rate the beds for â€œBest Artistryâ€, â€œBest Engineeredâ€, â€œJust plain Funniestâ€ and â€œMost Dressed for Successâ€. Cox Media Group (CMG) Miami is heating up the races withThe KVJ Morning Show acting as MCâ€™s for the day, Kevin Rolston, Virginia Sinicki and Jason. The racers line up to compete in time trials and move their way into the top 8 for single elimination heats to the speed championship. Top fundraiser gets a one-foot head start on their first heat to help speed them up.

Intermissions with live music and hilarious sponsor performances by Car2Go, The Olfactory Company and a â€œBiggest Loser â€œ Competition of Beds sponsored by Lucky 7. Talented musicians and dancers entertain while racers ready for the finals. A bed-to-bed race off if you will. The fastest team in each of the four divisions wins, Womenâ€™s, Menâ€™s, Co-Ed and Over 30.