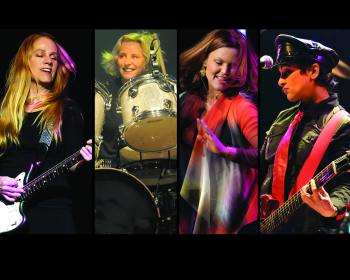 The much loved all-girl pop pioneers The Go-Goâ€™s will bring beauty, the beat and beyond to the Pavilion at Seminole Casino Coconut Creek on Saturday, September 28 at 8 p.m. Tickets go on sale on Sunday, July 28.

From their halcyon days as Americaâ€™s sweethearts to their current status as superstars who pioneered a genre, The Go-Goâ€™s have enjoyed an amazing three-decade reign as high pop priestesses. The internationally-loved hitmakers helped cement the foundation of the early â€˜80s pop-rock sound without the aid of outside composers, session players or, most importantly, creative compromise. From their very first show, the group sang and played their own songs, offering five feisty role models for a generation of ready-to-rock girls and good, hooky fun for pop-loving guys.

For The Go-Goâ€™s, their story truly is a punk version of the American Dream. The Go-Goâ€™s debuted in May of 1978, a time when there were other all-female bands, but ones orchestrated by men such as Phil Spector, Kim Fowley or Sonny Bono. The band was conceived in the very same gritty glitter of the rough Los Angeles scene that also birthed X, The Germs, and The Weirdos. By â€™79, the Go-Goâ€™s were beating their path to stardom on their own terms. They played every cool club and party in Los Angeles and released an early version of â€œWe Got the Beatâ€ through the quirky Stiff Records in the UK.

By 1981, the band was signed to upstart new wave haven IRS records with Beauty and The Beat, and the infectious debut U.S. single, â€œOur Lips Are Sealed,â€ was released. The double-platinum Beauty and The Beat reached #1 and was followed-up by Vacation in â€˜82 and Talk Show in â€™84. During those years, hits like â€œVacation,â€ â€œHead Over Heelsâ€ and â€œTurn to Youâ€ dominated the airwaves and, today, continue to live on in countless compilations, movie soundtracks, remakes and television commercials.