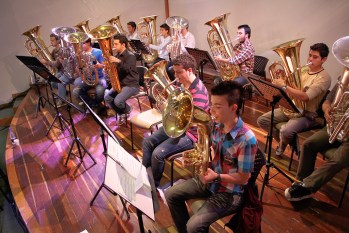 The Colombian Youth Philharmonic, a.k.a. FilarmÃ³nica Joven de Colombia (FJC), an orchestra composed of 106 of the most talented young classical musicians in all of Colombia and funded by the Bolivar Davivienda Foundation, is set to perform and film its first stateside concert in the internationally-renowned, Frank Gehry designed, New World Center in Miami Beach on July 26, 2013. The recording will be released on DVD.

Lead by the award-winning and masterful Alejandro Posada, whoâ€™s held principal and guest conductor roles in major orchestras throughout Europe and Latin America, the program will feature virtuoso Eduardo Rojas as piano soloist. The precocious Rojas was formerly the youngest dean in the history of Colombia to serve a music conservatory, and has collaborated with a host of internationally acclaimed orchestras and organizations. The music begins with a dress rehearsal where members of the media and select invitees will get a sneak peek of the show. The formal concert and VIP cocktail are to follow and will be attended by a whoâ€™s who of local and Colombian society. This program was made possible with the support of The Embassy of Colombia in Washington and the Consulate of Colombia in Miami, as part of Colombiaâ€™s Ministry of Foreign Affairs â€œPlan de PromociÃ³n de Colombia en el Exterior,â€ that promotes the country overseas through the diversity of its cultural expressions.

150 seats have been reserved for the general public.