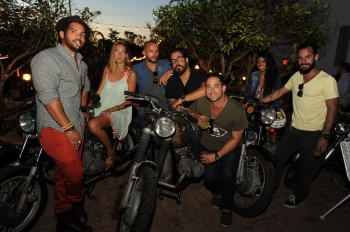 The trial was performed “Iron Chef’ style before four judges: David Blackmore, global brand ambassador for Glenmorangie/Arbeg, Trisha Cancilla, regional marketing manager for Glenmorangie/Ardbeg; Galena Mosevich, cocktail writer for Miami.com and The Miami Herald, and Mickey Heads, distillery manager for Ardbeg who came in all the way from Scotland to be a part of the event.

At 7:30pm, live bagpipes sounded to present the competition finalists Trevor Alberts of Gramp’s in Wynwood and Michael Parish of Broken Shaker, who each won a private edition bottle of Ardbeg or Glenmorangie. But to name the ultimate cocktail and mixologist, the contestants then entered a sudden death round where they each had to create a shot using Ardbeg or Glenmorangie. Michael Parish was crowned the first place winner earning a brand new iPad mini for his inventive and delicious concoction.

Guest enjoyed a variety of single malt whiskey samples throughout the evening including Ardbeg’s private edition Galileo, which was just named theWorld’s Best Single Malt Whiskey at the 2013 World Whiskey Awards in London. Ardbegâ€™s 10 Year Old, Uigeadail and Corryvreckan were also served along with Glenmorangieâ€™s The Original Lasanta, Quinta Ruban and Nectar dâ€™Or.

Artist Jon Grey entertained the crowd with the live creation of an original Twain vs. Ardbeg painting. Other fun highlights included Twain and Orwell Madlibs, an interactive photo area where guests could dress up as characters from Twain and Orwell books, butler passed Scottish bites, and of course,Broken Shaker’s famous hand crafted punch bowls.

What’s the connection between the whiskey’s and these writers? Glenmorangie’s Ealanta is aged exclusively in wooden casks sourced from the Mark Twain Nation Forest in the Missouri Ozark Mountains. While George Orwell wrote his famous book 1984 while living on the Isle of Jura in Scotland. The area is next to Islay, the home of Ardbeg.