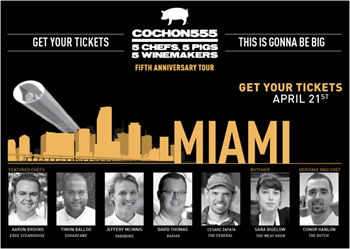 Do not miss it when this one-of-a-kind traveling culinary competition and tasting event comes home and marks a culinary milestone with its 5th Anniversary Tour.  Created to promote a national conversation around the sustainable farming of heritage-breed pigs, each event challenges five local chefs to prepare a menu from the entirety of one 200 pound family-raised heritage breed of pig, nose-to-tail.  Twenty judges (culinary luminaries) and 400 guests help decide the winning chef by voting on the "best bite of the day".  The winner will be crowned the "Prince of Porc" and will compete at Grand Cochon event at the FOOD & WINE Classic in Aspen on Sunday, June 16.

Rounding out the night, Miyabi/Zwilling USA presents a butcher demonstration featuring Sara Bigelow of The Meat Hook.  Also included in the evening is a preview of the new Heritage BBQ event in which Conor Hanlon of The Dutch will roll out a family meal â€“ an additional whole pig cooked barbecue-style immediately preceding the awards.