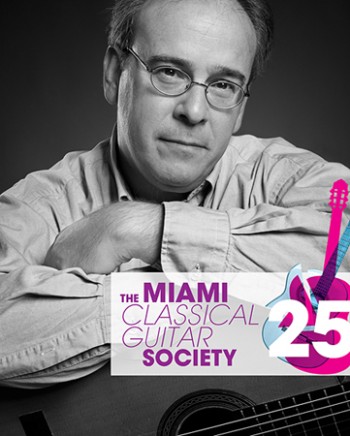 The Miami Classical Guitar Society is proud to present the fourth concert of our 25th Anniversary Season, featuring critically acclaimed American international performing and recording artist, Maestro Adam Holzman, hailed as “…polished and quite dazzling” by The New York Times; “…brilliant!” by De Gelderlander, Holland; and “…masterful!” by The Toronto Star.

Five-time Winner in major international competitions, including First Prize in the 1983 Guitar Foundation of America, International Competition in Quebec, Holzman has performed at the prestigious Concertgebouw in Amsterdam, and distinguished New York venues such as Kaufman Hall at the 92nd St. Y, Merkin Hall, and Carnegie Recital Hall. His recordings for the Naxos label have been critically acclaimed, and his commitment to new music has led him to co-commission Samuel Adler’s first Concerto for Guitar and Orchestra. Holzman has also premiered works by composers Robert Helps, Roland Dyens, and Stephen Funk Pearson among others.

Holzman is founder of the Guitar Department at the University of Texas at Austin’s Butler School of Music. He has held the title of “Maestro Extraordinario” by the Universidad Autonoma de Nuevo Leon, Monterrey, Mexico, was awarded the Ernst von Dohnanyi Prize for Outstanding Achievement from Florida State University, and has been named The Parker C. Fielder Regents Fellow in Music at the University of Texas at Austin. He has been featured on the covers of both Classical Guitar Magazine and Guitart Magazine.

Tickets are $25 general admission at the door, ($20 members/seniors/students with ID).

*In addition to his Concert, Adam Holzman will also be teaching a Masterclass on Friday, March 8 at 5pm
Please visit www.miamiguitar.org for Masterclass Registration