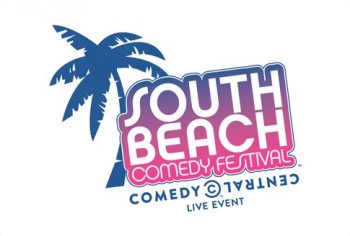 South Beach Comedy Festival returns to Miami Beach Wednesday, April 17th to Sunday, April 21st, for another stellar comedy showcase featuring some of the worldâ€™s most favorite entertainers. Now in its eighth year, the South Beach Comedy Festival continues to grow and remains one of the premiere comedy festivals for top comedic talent and fans across the country. This yearâ€™s event features Bill Burr, Jamel Debouzze, Pete Holmes, Jim Jefferies, Seth Meyers, Tracy Morgan, Amy Schumer, Sarah Silverman and much, much more. Tickets go on sale Friday, March 1st at 10AM through www.southbeachcomedyfestival.com, www.livenation.com, the Fillmore Box Office, all TicketMaster outlets or charge-by-phone: 1-800-745-3000.

Comedy Central and Live Nation also welcome back sponsors Taco Bell, The Miami Beach Visitors and Convention Authority, and The Miami Herald all for their 8th year as well as Deco Drive and new sponsor Freecreditscore.com.

Once again the Festival will utilize multiple locations to highlight its exciting variety of talent. Acts will perform at the Fillmore Miami Beach at the Jackie Gleason Theatre, 1700 Washington Avenue; Colony Theater, 1040 Lincoln Road; and the unique BACKSTAGE at the Fillmore. The Lincoln Road Stage at Euclid Avenue will also serve as the home to the Festivalâ€™s outdoor, nightly, free comedy stage every evening from Thursday through Saturday at 9PM.

The Festival begins on Wednesday, April 17th, 8PM with Bill Burr at the Fillmore Miami Beach. Bill Burr is one of the top comedic voices of his generation achieving success in TV and film as well as the live stage. Selling out theaters internationally, Burr is a regular with Letterman, Conan Oâ€™Brien and Jimmy Fallon. His Monday Morning Podcast is one of the most downloaded comedy podcasts on iTunes. Tickets are $45.50 and $35.50.

Seth Meyers performs Thursday, April 18th, 8PM at the Fillmore Miami Beach. As the head writer and sole â€œWeekend Updateâ€ anchor on Saturday Night Live for the past 6 years, Meyers charms audiences as he lampoons top news stories and entertains fan favorite guests. Meyers won the Emmy for Outstanding Original Music and Lyrics for host Justin Timberlakeâ€™s musical monologue. He was nominated in same category in 2012 for host Jason Segelâ€™s monologue song. Meyers has also garnered five additional Emmy nominations for his work as a writer on SNL and the 2011 special â€œThe Real Women of SNL.â€ Tickets are $37.50.

Appearing Thursday, April 18th, 8PM at the Colony Theater is Anjelah Johnson. Johnson became an internet sensation with her viral video â€œNail Salonâ€ which led to many stand up and performance opportunities. That same year she joined the cast of MADtv as a series regular, which spawned another internet sensation â€œBon Qui Qui.” This original character, a disgruntled fast food employee with no filter, has been enjoyed, viewed and replicated by over fifty-five million people worldwide. In June 2009 Anjelah recorded a one-hour special for Comedy Central and Warner Brothers Records. A second special is set to be released from her hometown of San Jose, CA this year. Tickets are $35.00.
Tracy Morgan takes center stage at the Fillmore on Friday, April 19th, 8PM. As a stand-up comic who has headlined across the country, Morgan was first introduced to television audiences in his role as â€œHustlemanâ€ on the hit comedy series â€œMartin.â€ He went on to join â€œSaturday Night Liveâ€ in 1996 where he appeared for seven seasons and created such memorable characters as â€œAstronaut Jonesâ€ and â€œBrian Fellows.â€ After leaving SNL, Morgan went on to star in his own comedy series â€œThe Tracy Morgan Showâ€. He has just finished up his most memorable role as the hilarious and mercurial Tracy Jordan on the award-winning NBC comedy series â€œ30 Rockâ€ co-starring with Tina Fey and Alec Baldwin. Tickets are $45.50 and $35.50.

Appearing Friday April 19th, 8PM at the Colony Theatre is Amy Schumer who is returning from her sold-out show at last yearâ€™s Festival. Schumer was recently featured as one of Variety’s â€œTop Ten Comics to Watchâ€ and her hit one-hour special, titled “Amy Schumer: Mostly Sex Stuff,” aired on Comedy Central and was one of the highest-rated and most-watched stand-up specials in 2012 with over 1.6 million total viewers watching the premiere. In 2011, she released her first album “Cutting” on Comedy Central Records. Her new series “Inside Amy Schumer,” premieres Tuesday, April 30 at 10:30 p.m. ET/PT on Comedy Central and features Schumer’s provocative and hilariously wicked mind as she explores topics revolving around sex, relationships, and the general clusterf*ck that is life through a series of scripted vignettes, stand-up comedy and man-on-the street interviews. Tickets are $35.00.

Sarah Silverman performs Saturday, April 20th, 8PM at the Fillmore Miami Beach. Emmy winner Sarah Silverman, dubbed by Rolling Stone â€œthe most outrageously funny woman alive,â€ is as versatile of a performer as they come. Her repertoire includes everything from film and television, stand-up comedy, to iconic online videos, and she added author to this list when she released her first book the New York Times Bestseller, The Bedwetter: Stories of Courage, Redemption, and Pee. Silverman was nominated for a Primetime Emmy in the Outstanding Actress in a Comedy Series category for her portrayal of a fictionalized version of herself in her Comedy Central series â€œThe Sarah Silverman Program.â€ This marked Comedy Centralâ€™s first ever Emmy nomination in a scripted acting category. Silverman voices a character in the Oscar nominated Disney animated film Wreck it Ralph and was recently seen starring opposite Michelle Williams and Seth Rogen in the dramedy Take This Waltz. Tickets are $59.50, $45.00 and $35.00.

Late night, 10:30PM, on Saturday, April 20th Jim Jefferies takes over the Fillmore stage. One of the most sought after comedians, Jefferies returned this past summer to sold-out performances at Montrealâ€™s Just For Laughs and Edinburghâ€™s Fringe Comedy Festival. In keeping with his reputation for being brutally honest, Jefferies cleverly subverts our expectation as he takes on topics such as fatherhood, love and education as well as his favourites: religion, porn and politics. He was seen in his Showtime one-hour comedy special Alcoholocaust and his debut Jim Jefferies: I Swear To God on HBO. His bold and painfully honest commentary captivated all who tuned in. Tickets are $35.50.

Finally on Sunday, April 21st, 7PM Jamel Debouzze takes the Fillmore stage for his first live performance in the

US, and the entire show will be in French. As a youth he participated in several improv contests such as the World Amateur Improvisation Championship in Quebec. In 1997, at only 17 years old, he got his first role in the cinema. This marked the beginning of a long series of movies such as AmÃ©lie, a film by Jean Pierre Jeunet, and Asterix & Obelix Meet Cleopatra, for which he was nominated for a CÃ©sar Award for best actor in a supporting role. Jamel continued to perform live on tour but also in the most beautiful Parisians venues such as the mythic Olympia. In July 2006, Debouzze created â€œJamelâ€™s Comedy Clubâ€, a TV show taped in his theater that highlights new talent. In 2011 Jamel made his big return to the stage with a whole new show called â€œAll About Jamelâ€. As the title says, he unveiled everything about himself, broaching events from his life with the humor and expressiveness that characterize him. Tickets are $75.50, $55.50 and $35.50.

There will also be exciting performances at the intimate BACKSTAGE at the Fillmore venue which brings attendees up close and personal with the performers.

First on Wednesday, April 17th the popular Mad Cat Theater Company presents two performances at 7 and 9:30PM. This time Mad Cat company member, Jessica Farr has written a new play â€œCharming Acts of Miseryâ€ that follows the ups and downs of fashion muse Isabella Blow (1958-2007) known to most for her brazen individual style and for discovering Alexander McQueen. Spanning several decades, this whirligig ride into Isabella’s life traverses both the fashion scene and the underpinnings of its central character’s psyche. We follow â€œIssiâ€ through the jungles of Sri Lanka, New York City and London until the lines between her public and private life become intensely blurred. Get ready South Beach and put a hat on it! Directed by Paul Tei. This is a fundraiser for the Company and tickets are $45.00 (VIP) and $25.00 in advance. On the day of the show tickets are $30.00 and $50.00 (VIP) available at the box office only.

Then on Friday, April 19th, 8PM, Joey â€œCocoâ€ Diaz takes the stage. Sometimes it takes a huge movie role or a part in a popular television series to put a stand-up comedian on the radar; with Diaz it was a #1 comedy album on iTunes and Billboard. Diaz has appeared in numerous films and television shows but his storytelling on the extremely popular podcast, â€œThe Joe Rogan Experienceâ€ really showcased one of the funniest comedians working today. Diazâ€™ R-rated outlook on life will get you howling in your seats but thatâ€™s what a good comedian is supposed to do. What makes him special is his ability to tell a story so that regardless of the subject matter, youâ€™re still laughing. Whether itâ€™s lighting a hookerâ€™s wig on fire, or attacking a nun in the 5th grade, youâ€™ll be cheering for him. Tickets are $20.00.

Pete Holmes performs on Saturday, April 20th, 8PM. Pete Holmes is a nationally touring standup comedian, actor, improviser, writer and cartoonist and now TBS has just announced that Holmes will have his own late night show at midnight following Conan. As a standup, Holmes also has a one hour Comedy Central Special, Nice Try, the Devil which will air in 2013. His 2011 CD Impregnated with Wonder made several â€œTop Comedy Recordingsâ€ lists. Heâ€™s appeared on his own half-hour â€œComedy Central Presentsâ€ and on â€œPremium Blend.â€ He was also featured on VH1â€™s â€œBest Week Ever.â€ Pete has written for and voices multiple characters on Comedy Centralâ€™s â€œUgly Americansâ€ and is the voice and writer of the popular â€œE*Trade Babyâ€ commercials. Tickets are $20.00.

And donâ€™t forget to catch the free Outdoor Comedy Stage on Lincoln Road at Euclid Avenue, nightly from Thursday through Saturday at 9PM. Always a highlight of the Festival, this year you can catch rising stars Michael Che, Chris Distefano, Sean Donnelly, Sarah Tiana and Brooks Wheelan.