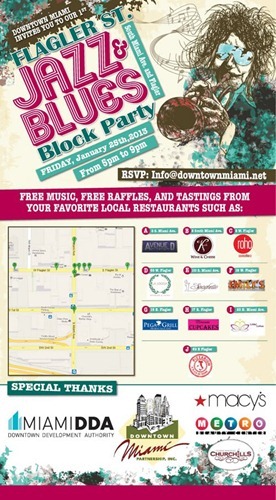 We are closing down the street January 25th! Come join us after work for a jazz and blues filled street party. Music, drinks, food and street vendors will take over Miami Avenue just south of Flagler St.

Leo Casino
Mr. Casino has been in show business for the past 30 years. His musical training, beginning at the early age of nine, included work with such musical giants as Stanley Turrentine, Sy Morocco and George Benson in his hometown of Pittsburgh, Pennsylvania. He received a full scholarship to the prestigious Howard University in Washington, D. C.

Edil DeLeon Vibraphone Jazz Trio
The Edil DeLeon Vibraphone Trio plays a variety of jazz music, including straight ahead traditional latin styles.Â  Their repertoire includes jazz standards as well as originals influenced by vibraphone greats Milt Jackson, Cal Tjader and Bobby Hutcherson.Â Â  Its members have all performed as sidemen of nationally recognized and local bands, and as leaders of their own bands.Â  Specifically, vibraphonist and leader Edil DeLeon, in addition to having done several vibraphone solo and duo performances, has performed with Rey Monrouzeauâ€™s New Octet, De Paisas Project, The FIU Latin Jazz Ensemble and the FIU Percussion Ensemble among others

Gustavo Beaujardin Latin Jazz Quartet
At the age of nine, Gustavo embarked upon his musical journey when he began drum lessons. Within a short time, he was introduced to audiences as a percussionist in a local symphonic band focusing on timpani, orchestral percussion and drum set. In his early teen years, Gustavo began to play professionally throughout his hometown of West Palm Beach, Florida.

Hosted by Big Brooklyn Red
Big Brooklyn Red is a familiar face (and voice) in South Florida. He has been cultivating the live music scene in Miami since 1997 and performs here regularly when not in NYC or on tour. He has lent his soulful vocals to a number of projects including soulful house records that have been featured at the Winter Music Conference for the past four years.Â  During the 2001-02 NBA season Big Brooklyn Red and The Miami Funk All-Stars were the house band for The Miami Heat. A â€œShowtime at The Apolloâ€ champion, Big Brooklyn Red has been featured on BETJ and has a video running on MTV Italia