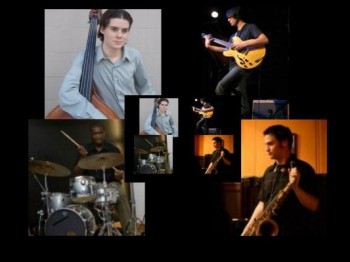 FREE Admission – Open to the public

Gary has been performing and recording professionally as a bassist for the past 10 years. After spending his early years as a musician in north Florida, Gary moved to Miami in 2007 in order to study music at the University of Miami. He has recently completed both a Bachelorâ€™s Degree and a Masterâ€™s Degree from the University and continues to work professionally as a musician in and around south Florida. Gary has been recognized as a composer in Downbeat Magazine, and has also participated in Betty Carterâ€™s Jazz Ahead, at the Kennedy Center in Washington D.C. While living in Miami, Gary has performed alongside artists such as Shelly Berg, Kevin Mahogany, Ira Sullivan, and John Fedchock

While securing an in-demand reputation throughout the country Tim has performed and recorded with many significant jazz artists. Having recently completed a Masters in Jazz Performance at the University of Miami, Tim has continued on the path of creative music, continually strengthening his foundation in the jazz tradition as well as crafting his individual musical expression through composition.

Mark Small is a saxophonist/woodwind player/composer who resides in New York City and Miami. After studying in his home state of Connecticut and attending the New England Conservatory in Boston, he moved to NYC where he quickly began working in numerous facets of the New Yorkâ€™s diverse music scene. While in NYC, Mark performs with his own band and as a sideman for bands such as the Village Vanguard Orchestra and Darcy James Argueâ€™s Secret Society (which he is featured on the Grammy nominated debut record) among other bands at such notable clubs as the Blue Note, 55 bar,Village Vanguard, Fat Cat, and the Jazz Gallery.

Michael Piolet is a drummer from Chicago, IL who is currently a senior enrolled at the University of Miami on a full ride scholarship. He is playing in the Stamps Quintet, which consists of the top five freshmen in the country on their respective instruments. He is pursuing a B.M. in jazz performance and is studying with Bee Geeâ€™s former drummer Steve Rucker.

Recently the winner of the 2012 Phillips Jazz Piano competition, Angelo Versace is an experienced pianist who plays professionally in jazz, gospel, funk, and R&B groups. In 2003, Versace played at the New Orleans Jazz Festival at the Invitation of Ellis Marsalis. Later that same year, Versace was chosen to play in the North Sea Jazz Festival with his jazz trio. In 2005, Versace became a member of the Dwayne Dolphin Piccolo Bass Band and has recorded two albums with the group to date, â€œMingâ€ and â€œPretty Girlâ€. In 2007, Versace recorded a classical album with Alto Saxophonist Keith Young Called â€œSaxophone Voices from Five Countriesâ€. In 2008, he recorded another album, â€œHahn Hymns,â€ with platinum selling jazz guitarist, Jerry Hahn. Versace is currently awaiting the release of his latest recording with trumpeter Augie Haas, â€œENDlessâ€ as well as a new project with Take 6 vocalist, Khristian Dentley.