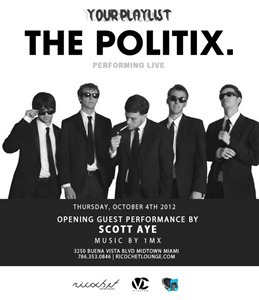 After last weekâ€™s sell out performance at Bardot, The Politix continue their fall performance schedule next week at Ricochet Lounge in the heart of Miamiâ€™s Design District on  October 4th, 2012. The Politix will showcase their signature Hip Hop and Jazz fusion repertoire along with a special guest performance from up and coming Tampa artist Scott Aye.

The Politix are an emerging Hip Hop band based in Miami, FL. The group consists of five young talented musicians that blend their Jazz training with Hip Hop influences to create a new infused sound. In less than 2 years The Politix have become staples on the Miami music circuit, consistently performing at popular venues such as Bardot, The Stage, and Grand Central. Many have compared the group to legendary Hip Hop groups such as De La Soul, Tribe Called Quest, and The Roots. The local buzz surrounding the group has been confirmed by club owners such as Brian Basti, co-owner of Grand Central Miami, who stated, â€œit is only a matter of time until The Politix are in the national spotlight.â€œ

With the release of their debut EP â€œThe Inaugurationâ€ in 2011, The Politix have spent the past year working on their first full length self-entitled album, â€œThe Po-lit-tix.â€ The album is completely self recorded and produced, and is expected to be released in early May in both CD and digital formats. The first single of the album and music video, â€œBlack and Blue,â€ featuring Raquel Sofia, brought tremendous viral attention to The Politixâ€™s music. It has since been featured on several music blogs including illroots.com, 2dopeboyz.com, and iamashleyoutrageous.com. Popular Hip Hop blogger Ashley Outrageous, praised the debut music video in her review stating, â€œIâ€™m loving the story line of this visual and the chorus. The whole band plus emcee combo is definitely a plus too. Definitely a group to watch out for.â€ The Politix intend for this album to be a defining project that will introduce the world to their sophisticated hip-hop sound.

Formed in September 2010, The Politix was the brainchild of the bandâ€™s drummer, Aaron Glueckauf and now band manager, Kris Martin. The two took aspiring Miami emcee John Payan and paired him with three other University of Miami Frost School of Music students. The group includes John Payan (emecc/vocalist), Jason Matthews (Keyboard), Patrick Howard (Bass), Nick Tannura (Guitar), and Aaron Glueckauf (Drums). From Philadelphia to Chicago, each member is from a different part of the country and this diversity is at the foundation of The Politix unique sound. After the group formed in September 2011, their first major performance was scheduled for December. This was no ordinary debut performance as they were booked to open for emerging Hip Hop sensation Wiz Khalifa at The University of Miami. With over 5,000 people in attendance, The Politix debut performance propelled them into local stardom along side other popular Miami groups such as Mayday and Artofficial.

With the release of their debut album, {po-â€™li-tiks}, the group foresees this project as being a groundbreaking point in their career. The Politix plan to tour with the record, going on a Florida college tour this summer and eventually a national tour in Spring 2012. The Politix take pride in being completely independent artists and intend to due whatever it takes for the world to hear their music.