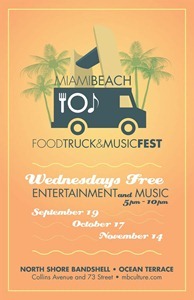 Miami Beachâ€™s North Shore Park Bandshell & Ocean Terrace will dress in the typical, characteristic Latin flavor of the North Beach area to welcome the Miami Beach Food Truck and Music Fest on Wednesday nights this fall. The events take place on September 19, October 17 and November 14, from 5:00 p.m. To 10:00 p.m., at the North Shore Park Bandshell on Collins Avenue and 73 Street. The food and music fest will feature the popular mobile food trucks, free entertainment and participation by area restaurants.

The salsa sounds of the Marlow Rosado y La RiqueÃ±aâ€™s nine-piece band will kick off the festival on September 19 from 6 to 9 pm.

With over twenty years’ experience in the music industry, pianist-composer-producer Marlow Rosado has developed a powerful portfolio working with many of the top artists in the Latin recording world. Singing with world-renowned producer Desmond Child has led him to work with major artists such as Alejandra Guzman and Ricky Martin (on MÃ¡s). With eleven Grammy nominations to his credit, Rosado’s influence in the Tropical genre can be felt on records ranging from Elvis Crespo to Gran Combo.

His 2009 debut album, Salsalsa, featuring Andy MontaÃ±ez, lived at the #1 spot on Puerto Rico’s hottest Salsa station, Zeta 93, for over eight weeks. His second and latest CD, Retro, (2012) takes some of the strongest songs from the 1970’s, maintaining the essentials of the originals, but metamorphosing them in Marlow’s 21st-century conception until they become entirely his own. The album features guest appearances by Tito Puente, Jr., Ismael Miranda, Bobby Cruz, Papo Lucca, Kevin Ceballo, Marlon Fernandez, Luigi Texidor, Quique Dominich, Salvador Cuevas, and Tony Vega. It has received rave reviews and has made the Top Ten list nationally in its category.

"It is a great neighborhood and weâ€™re looking forward to having people come and enjoy good food, good music, and the beautiful beach and also hoping to entice neighboring residents to come and discover the charm of North Beach,â€ said Miami Beach Acting Assistant City Manager Max Sklar.