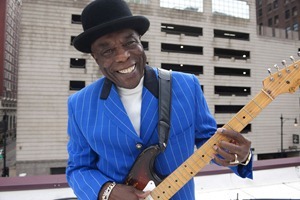 The legendary Buddy Guy and Jonny Lang are bringing the blues to The Pavilion at Seminole Casino Coconut Creek at 7 p.m. on Sunday, November 11. Guyâ€™s music can vary from the most traditional, deepest blues to a creative and unpredictable gumbo of the blues, avant rock, soul and free jazz that morphs at each of his performances.

Ranked 30th in Rolling Stone magazine’s list of the "100 Greatest Guitarists of All Time," Guy is known for his showmanship on stage â€“ playing his guitar with drumsticks or strolling into the audience while playing solos. Fans  at Seminole Casino Coconut Creek can expect to hear favorites like â€œAinâ€™t No Sunshine,â€ â€œDamn Right Iâ€™ve Got the Blues,â€ â€œMustang Sally,â€ â€œFeels Like Rainâ€ and "Stone Crazy," which was ranked 78th in Rolling Stone’s list of the â€œ100 Greatest Guitar Songs of All Time.â€

Critically acclaimed, Guy is a pioneer of the Chicago blues sound and has served as an influence to some of the most notable musicians of his generation, including Eric Clapton, Jimi Hendrix and Stevie Ray Vaughan. In the 1960s Guy was a member of Muddy Waters’ band and was a house guitarist at Chess Records. He can be heard on Howlin’ Wolf’s "Killing Floor" and Koko Taylor’s "Wang Dang Doodle" as well as on his own Chess sides and the fine series of records he made with harmonica player Junior Wells.

Jonny Lang is a Grammy Award-winning American blues, gospel and rock singer, songwriter, guitarist and recording artist. Lang’s music is notable for both his unusual voice, which has been compared to that of a 40-year-old blues veteran, and for his guitar solos. His solo patterns have especially been noted for his frequent use of wide vibratos.

In more than ten years on the road, Lang has toured with the Rolling Stones, Buddy Guy, Aerosmith, B.B. King, Blues Traveler, Jeff Beck and Sting. In 1999, he was invited to play for a White House audience including President and Mrs. Clinton. Lang also made a cameo appearance in the film Blues Brothers 2000 as a janitor. In addition, Lang appears regularly as a part of the Experience Hendrix Tour along with many other well-known guitarists to pay tribute the deceased guitar legend Jimi Hendrix.

Tickets start at $70* and are available at www.ticketmaster.com. *Additional fees may apply