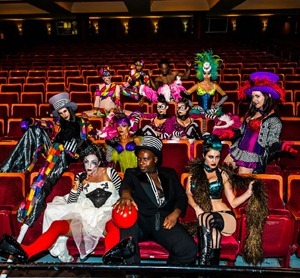 General Admission Tickets start at $36.50. There are also a limited number of tables and VIP Love Couches available for purchase by visiting the Fillmore Box Office or going to ticketmaster.com or fillmoremb.com or calling 800-745-3000.

Circ X, Miami based theatrical circus troupe, celebrate their 10 year Anniversary by producing a cabaret/circus spectacular at the Fillmore Miami Beach at the Jackie Gleason Theater, Saturday, October 6th at 9PM.  Established in 2002, Circ X has performed all over the world providing entertainment to a variety of clientele from Fortune 500 companies to independent night clubs and cabaret houses.  Now, as they approach their 10 year anniversary, they aim to produce a show on their own terms at one of Miami Florida’s most iconic theaters.

Described as one part circus, two part burlesque, a pinch of class and a dash of trash, Circ X, Miami’s most provocative performance troupe, will produce a ‘retro-spectacle’, as they re visit some of their most popular numbers throughout the past decade and adapt them to the big stage.  "Usually we are performing at crowded  night clubs, make shift stages at corporate parties or even peoples living rooms,  performing at a venue like the Fillmore, will give us the opportunity to really revamp the past routines and have them realized at their full potential."  states Diana Lozano, founder and artistic Director for the company.

In addition to the larger production numbers, this evening will also feature work from the individual artist that make up the Circ X family.  Seasoned veterans in the Theater and Dance community such as Octavio Campos and Natasha Tsakos, will be contributing some of their personal creations as well as emerging artist such as Luis Cuevas, who recently premiered his work at the Hear and Now Festival through the Miami Light Project.