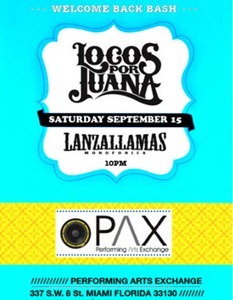 Locos por Juana invite you to Experience The New
LATIN music + art Sessions , Mixing Music and Art together as ONE.

2 time Grammy Nominated Locos por Juana will be presenting
songs for their new 2012 anticipated Album â€œ Somos de la Calle â€œ
Combining a Mix of Sounds from Colombia and Latin America makes the sounds from the Streets, a perfect Combination for this Album.

Additionally, their previous albums (as an independent band) were nominated to Premio Lo Nuestro in 2003 for Best Urban Artist and the Latin Grammy Awards in 2005 for Best Rock Album.

Locos Por Juanaâ€™s style of life integrates a message of unity and their philosophy of â€œOne Soundâ€, a true reflection of the combination of Cumbia, Reggae, Rock and a myriad of other worldly influences resonating in every track of â€œLa Verdadâ€.

The result is fresh and innovative, music that has traveled all over the United States and beyond. Currently, the band is on a rigorous tour and promotion schedule in support of â€œLa Verdadâ€ through New York, Los Angeles and their hometown of Miami. Stay tuned for moreâ€¦

Lanzallamas
llluminating the world through music!
"The voice of the world is calling for everyone to listen." (Tibetan world wisdom)
"Our unit is rooted in a deep love for folklore, afro-latin beats and a global voice. We bring a gift to share with our audience and a desire to elevate everyone in joy and dance!"
Lanzallamas shines as a unique modern world music ensamble comprised of Grammy-award nominated artists fusing with the finest talent in this multi-cultural world. A strong stage performance is a Lanzallamas highlight. The music is charged with melodic fire and a unique global chemistry. Lanzallamas has been invited to perform along with international world music stars such as Salif Keita, NovaLima, Cultura ProfÃ©tica, SideStepper, Arturo Sandoval, Belo, The Hotbutter Rum & Shamar Allen to name a few.
Performances at prestigiuos festivals such as: JVC Jazz Fest, Heineken TransAtlantic Festival, Carnival on the Mile, Calle 8 Festival, Rhythm Explotion, Moksha Family Festival, Earthdance Festival, AfroRoots Fest, FÃ©te de la Musique, Sleepless Nights Miami and Art Basel Miami. These have put Lanzallamas on the radar as an essential band for international festivals. Lanzallamas has also toured across the US and performed at top venues like SOB’S (NYC), TIPITINAS (New Orleans), BRUNO’S (Ca) and Murnaloy Theater (Mo).
~Lanzallamas proudly introduces MEZCLA! a 5 song cd co-produced by Multi-Grammy winner producer/composer Clay Oswald.~
"Our sound is modern yet folklorian. Our message is geared towards the future. The mission is to bring joy and healing energy to all corners of the world. The dream is to participate in creating the model for a new world of light, music and dance!"