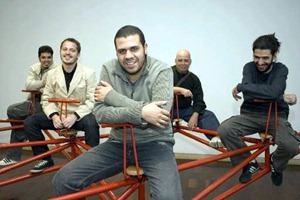 Hamilton de Holanda was born in Rio de Janeiro in 1976 and shortly thereafter his family moved to the capital, Brasilia.
I was five years old and my grandfather gave me my first mandolin.
My father was my first maestro. In 1982, Hamilton was six years old. He and his eleven-year-old brother, Fernando CÃ©sar, who played the seven-string guitar, formed the duo called Dois de Ouro.
Since there wasn’t a mandolin professor I had to take the violin course as it was the most â€œsimilarâ€ instrument, or at least one with the same tuning.
Hamilton studied at the Brasilia School of Music from 1983 to 1992.
His education continued with a Diploma in Composition from the University of Brasilia, where he won the â€œAward for Best Work of Scientific Initiation in Musicâ€ â€“ PIBIC â€“ for his composition of a concert for mandolin and orchestra.
His composition â€œDestroÃ§ando a macaxeiraâ€ won second place and later entitled the first Dois de Ouro CD. Published in 1997, both the public and critics alike received this CD with great attention.
In October 1998, the Dois de Ouro duo published the album entitled â€œA nova cara do velho Choroâ€ (The New Face of Old Choro). The daily Correio Braziliense elected it as the MPB disc of the year. And Dois de Ouro won the PrÃªmio Candango de Cultura award given by the Secretaria de Cultura do Distrito Federal (Secretary of Culture of the Federal District).
Also in Rio, in 1999, Hamilton joined guitarist Marco Pereira and ZÃ©lia Duncan on the Grandes Encontros project at the Leblon Theater and then with Marco Pereira and Dois de Ouro at the Clube do Choro in Brasilia with the â€œ50 anos de Brasileirinhoâ€ concert.
They ranked third at the â€œ1st MPB Visa Awardsâ€. This result was considered unfair and was contested by the audience present at the Cultura ArtÃ­stica Theater in SÃ£o Paulo.
In February 2000, he toured with Marco Pereira in the south of France.
He played as a soloist with the ClÃ¡udio Santoro National Theater Symphony Orchestra, the Brasilia Philharmonic Orchestra, the State of SÃ£o Paulo Jazz Symphony Orchestra and with the Brasilia School of Music Orchestra.
In 1999, 2000 and 2001, he taught bandolim (mandolin) at the Brasilia School of Music and the Raphael Rabello Brazilian School of Choro (Rabello was a great guitar player who died prematurely). This was the first school of this kind in Brazil and Hamilton went on to become its coordinator.
In September 2000, Dois de Ouro published its third album entitled simply â€œDois de Ouroâ€. Next, in early 2001, came the album â€œLuz das Cordasâ€ with guitar player Marco Pereira.
A â€œhistoricâ€ concert was the 15th Edition of the Free Jazz Festival in Rio de Janeiro and then in SÃ£o Paulo. He also performed at the Arts Alive International Festival in Johannesburg, South Africa, the Paris Music Festival, the Vienna Jazz Festival and at the Brazilian Music Festival in Istanbul.
More recent group work has included the BrasÃ­lia Brasil Trio, formed with guitarists RogÃ©rio Caetano and Daniel Santiago. The trio has already won the Rumos Musicais ItaÃº Cultural award for its original â€œsound.â€ It published a CD entitled â€œAbre Alasâ€ in 2001 on the Caravelas label.
On December 4, 2001, he unanimously won the Icatu Hartford de Artes 2001 award for Best Instrumentalist in Brazil. This allowed him to live a year in Paris in the CitÃ© Internationale des Arts.
In June 2002, he performed concerts in various Brazilian cities to present his first â€œsoloâ€ CD entitled â€œHamilton de Holandaâ€, recorded on the Velas label. The album was dedicated to the four masters of the mandolin: Jacob, Luperce, Joel and Armandinho.
In July 2002, he was a guest at two important festivals in Corsica: Les Nuits de La guitare with Marco Pereira and the first ever International Mandolin Festival of Corsica, of which he is now the â€œOfficial Godfather.â€
In September he played before an audience of 10,000 people at the SÃ£o Luiz International Music Festival. He then went back to Paris, where he met resounding success at the La Cigalle Theater at a show of MÃ¡rcio Faraco, a Brazilian with deep roots in France.
Shows then followed at the Paris Clube do Choro, the La Vieille Grille Theater and the Baiser SalÃ© Jazz Club.
He was once again on tour in France, with his brother Fernando CÃ©sar on the seven-string guitar. He was called the â€œPrince de la mandolineâ€ by the Parisian periodical Nova Magazine. He returned to France in 2003, this time with his BrasÃ­lia Brasil group.
With Marco Pereira, he toured in Italy and Switzerland for the first time in November, with 12 concerts including these cities: Milan, Genoa, Verona, Siena and Bellinzona.
In April, he took off for a tour in the USA, playing at university campuses in Florida with Marco Pereira and in Los Angeles with the Brazilian Modern Choro Ensemble, receiving renewed acclaim from audiences and critics alike.