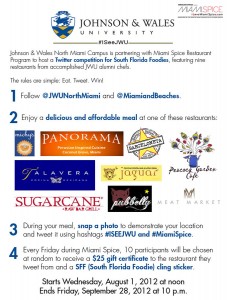 August 1, 2012 , 12 pm
United States
There are nine different restaurants participating in this event:

Johnson & Wales North Miami Campus is partnering with Miami Spice to host a Twitter Competition for South Florida Foodies. Nine restaurants featuring accomplished JWU alumni chefs, who are also participating in Miami Spice, will be involved in the #ISEEJWU Twitter Competition in order to give foodies the opportunity to win prizes and eat at delicious restaurants. The rules are simple: eat at one of the nine participating restaurants (see attached and below). During your meal, snap a photo to demonstrate your location and tweet it using hashtags #ISEEJWU and #MiamiSpice. Every Friday during Miami Spice, ten participants will be chosen at random to receive a $25 gift certificate to the restaurant they tweet from and a SFF (South Florida Foodie) cling sticker.

This contest is open to anyone who eats at one of the nine participating restaurants during Miami Spice. Eat, tweet and win!