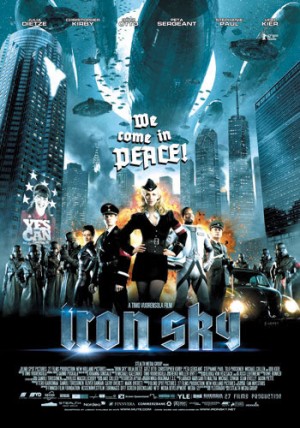 Bring Iron Sky to Miami!
Tickets $10 each.
Purchase Your Tickets Online
If the minimum number of 41 is not sold, you will get a full refund.
More Info & Discussion

The guys over at Energia Productions secured a US distribution deal for Iron Sky finally. However, due to the quirky nature of independent cinema, the film will only be shown in theatres where enough presale tickets are sold to justify showing it. So, Talk Nightlife established a dialog with them and the good people at Tugg to bring a showing of the movie to the Miami area.

Tugg enables anyone to bring the movies they want to see to local theatres. It is like a Kickstarter for cinema buffs and independent filmmakers.

Here is where we come in. Provided enough presale tickets are sold (41) the film will be shown at the AMC Aventura 24 at 7:30 PM on Thursday August 23rd.

Ticket cost: $10.00 – Ten Dollars.
Buy Online
Yes, if we do not meet our funding goal, you get your ten dollars back.

About the film:
In the last moments of World War II, a secret Nazi space program evaded destruction by fleeing to the Dark Side of the Moon. During 70 years of utter secrecy, the Nazis construct a gigantic space fortress with a massive armada of flying saucers.

When American astronaut James Washington (Christopher Kirby) puts down his Lunar Lander a bit too close to the secret Nazi base, the Moon FÃ¼hrer (Udo Kier) decides the glorious moment of retaking the Earth has arrived sooner than expected. Washington claims the mission is just a publicity stunt for the President of the United States (Stephanie Paul), but what else could the man be but a scout for the imminent attack by Earth forces? The Fourth Reich must act!

Two Nazi officers, ruthless Klaus Adler (GÃ¶tz Otto) and idealistic Renate Richter (Julia Dietze), travel to Earth to prepare the invasion. In the end when the Moon Nazi UFO armada darkens the skies, ready to strike at the unprepared Earth, every man, woman and nation alike, must re-evaluate their priorities.

Iron Sky is a dark science fiction comedy directed by Timo Vuorensola and will feature musical score composed by Laibach. The film is produced by Blind Spot Pictures and Energia Productions in Finland, and co-produced by 27 Films in Germany and New Holland Pictures in Australia. Principal photography took place in Germany in November-December 2010 and in Australia in January-February 2011.