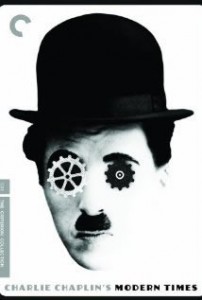 Charlie Chaplin: The Forgotten Years
This documentary about Charlie Chaplin focuses on his late years when he lived with his family in a village on Lake Geneva in Switzerland. His personal life and his love for the circus are depicted as well as the late works of his professional career, including his extensive work as a composer. In addition, the film reveals the Swiss intelligence agency’s file on Chaplin. Features numerous archive clips and new interviews with family members and various entertainment stars, including Petula Clark, who sings her Chaplin-written hit “This Is My Song” in his villa. (Documentary/Biography)

Modern Times
Chaplins last ‘silent’ film, filled with sound effects, was made when everyone else was making talkies. Charlie turns against modern society, the machine age, (The use of sound in films ?) and progress. Firstly we see him frantically trying to keep up with a production line, tightening bolts. He is selected for an experiment with an automatic feeding machine, but various mishaps leads his boss to believe he has gone mad, and Charlie is sent to a mental hospital… When he gets out, he is mistaken for a communist while waving a red flag, sent to jail, foils a jailbreak, and is let out again. We follow Charlie through many more escapades before the film is out. (Comedy/Drama/Romance)

FREE admission, open to the public