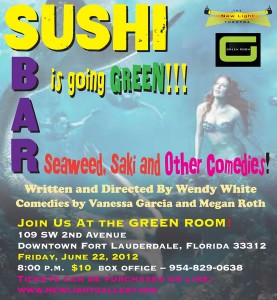 Sushi Bar is a run away hit! Join us at our brand new venue – the Green Room Night Club for a fun night of Seaweed, Sushi and Other Comedies! Directed by Wendy White Comedies written by playwrights Vanessa Garcia, Megan Roth and Wendy White

Introducing the Break Away Hit – Sushi Bar and Other comedies!

Tickets are $10
â€¢ Contact the New Light Theatre Box office for tickets at 954-829-0638
â€¢ Tickets can also be purchased online via paypal at www.newlightgallery.org

â€œSushi Bar and Other Comedies are totally inspired by true life experiences where joy and seduction are found in the most unusual of placesâ€ states playwright Wendy White, â€œComedies occur in the funniest places – expect the unexpected at your favorite Sushi Bar, French CafÃ© and Chess Game!â€

Wendy White states: â€œThanks to Bridges Aderhold for the invitation to exhibit at the GAB Gallery painting exhibition at the Green Room in April and for the introduction to the talented Miguel Bravo, Green Room Marketing Director a new door is open for New Light Theatre performances! Itâ€™s an exciting time.â€

Bridges Aderhold, Gallery Director of GAB Gallery in Wynwood, Miami opened his doors for performances of the New Light Foundation and The Krane in June 2010 and we went forward to perform off-Broadway in New York City; at the Edinburgh Fringe Festival in Scotland; in Hollywood, California; consequently the New Light Theatre was born in 2011!

Wendy White would like to thank the wonderfully talented playwright Vanessa Garcia, Artistic Director of Krane, Inc. for all her support in the process of developing Sushi Bar and Other Comedies – In 2010, Garcia, the Founding Artistic Director of Krane, Inc. was named one of Miami’s 20 Under 40 by The Miami Herald for her work in theatre. For more information about Garcia, please visit: www.vanessagarcia.org

The dream team includes the fabulous Megan Roth, whose plays and monologues have been produced in Miami and broadcasted online. Her poetry has been published in Opium, POEM, Jellyfish, and several other literary magazines. Her fiction manuscript, Elizabeth, was a finalist in the 2011 Calvino Prize. She has also been a finalist in the James Jones First Novel Contest and the SLS Fiction Prize. Megan currently teaches Creative Writing and Literature at Florida Atlantic University and lives in Hollywood, Florida.

The New Light Foundation, a 501(c)3 non-profit public foundation, has won numerous awards around the globe, has performed everywhere from Amsterdam to Paris; from Miami to Los Angeles to New York City; and has tackled subjects relating to women, love, politics, and Shakespeare. More information about the writer and director, Wendy White can be found on her website: www.newlightgallery.org. Please visit: http://www.newlightgallery.org/paintingswendy/theater-res