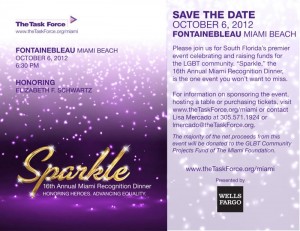 The National Gay and Lesbian Task Force is proud to produce the 16th annual Miami Recognition Dinner, presented by Wells Fargo, at the Fontainebleau Miami Beach on Saturday, Oct. 6. This annual fundraising event honors individuals for their outstanding contributions to the social, cultural, political and humanitarian needs of the lesbian, gay, bisexual and transgender (LGBT) community.

This year the Task Force will be honoring advocate Matt Foreman, currently the director of Gay and Immigrant Rights Programs at the Evelyn and Walter Haas, Jr. Fund in San Francisco, with the 2012 National Leadership Award. Local activist and attorney Elizabeth F. Schwartz will receive the 2012 Eddy McIntyre Community Service Award. The event will be hosted by actor/director LeVar Burton.

For the first time ever, the Miami Recognition Dinner will offer complimentary on-site childcare for all guests who have children in honor of Schwartz, who has dedicated her life to expanding and protecting LGBT families. (Childcare services must be reserved in advance).

Matt Foreman, the 2012 National Leadership Award recipient, has spent his adult life working for LGBT rights, as a volunteer, as executive director of local, statewide and national LGBT organizations and, most recently, as director of one of the most LGBT-supportive foundations in the nation. He headed up the Task Force from 2003 to 2008, where he was a tireless and outspoken advocate for fairness and justice, becoming the country’s most frequently-quoted LGBT rights leader.

Schwartz is chair of the Gay and Lesbian Lawyers Association of South Florida and a member of the National Family Law Advisory Council of the National Center for Lesbian Rights. She has served as pro bono counsel in several cases seeking to overturn Floridaâ€™s 1977 ban forbidding gays and lesbians from adopting children. She is a founding member of the Aqua Foundation for Women and has donated her time, money and expertise to many organizations serving the LGBT community on a local, state and national level. Her contributions have been recognized by many organizations, including Equality Florida, SAVE, SunServe and the Miami-Dade Gay and Lesbian Chamber of Commerce.

Launched in 1997, the Miami Recognition Dinner has become a vital source of funding for organizations serving the LGBT community. Since assuming responsibility for the dinner and its sister event, Winter Party Festival, in 2004, the Task Force has donated nearly $1.4 million from the proceeds of the two events to the Miami-Dade community. The Task Force donates the majority of the proceeds to The Miami Foundationâ€™s GLBT Community Projects Fund, which re-grants the money to local organizations.

At last yearâ€™s event, more than 35 sponsors and 775 guests contributed to another record-breaking year. The eventâ€™s coveted silent auction surpassed records from previous years raising more than $120,000, contributing to an event total of well over $450,000.