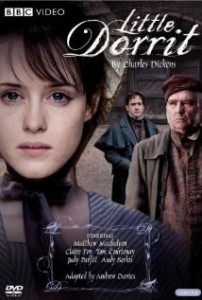 Little Dorrit (Parts 1-8)
Since her birth, Amy Dorrit has lived in the Marshalsea Prison for Debt, where she cares for her father William, who is held in great esteem by the other inmates. To help financially assist her family, she works as a seamstress for Mrs. Clennam, a semi-invalid who is confined to her crumbling home with her servants, the sinister Jeremiah Flintwinch and his bumbling wife Affery.ï¿½ Arthur Clennam returns from China with his father’s pocket watch and delivers it to Mrs. Clennam, as Mr. Clennam’s dying wish was for the watch to go to Arthur’s mother. Arthur becomes reacquainted with his former sweetheart, the now overweight widow Flora Finching, who hopes to rekindle the affection the couple shared before they were separated by their disapproving parents. However, he is enamoured with Pet Meagles, who favours ne’er-do-well aspiring artist Henry Gowan, much to the distress of her parents. Meanwhile, in Marseille, murderer Rigaud and his timid cell-mate Jean-Baptiste Cavaletto sep
arately are released from jail, and Cavaletto makes plans to journey to England.ï¿½ Arthur befriends Amy, whose affection for him grows as John Chivery, who oversees the Marshalsea entrance with his father, watches in dismay, as he is in love with the girl.ï¿½ Arthur’s father’s dying words lead him to believe his family may have been responsible for the Dorrits’ misfortunes, resulting in Mr. Dorrit being imprisoned without just cause. He asks rent collector and amateur detective Mr. Pancks to investigate the situation.ï¿½ He has discovered William Dorrit is heir to a fortune and now is in a position to settle his debts and leave Marshalsea as a very wealthy man. Mr. Dorrit insists his family forget their shameful past and everyone who was a part of it, and he hires Mrs. Hortensia General to educate his daughters and prepare them for their new position in society. When Arthur’s birth mother died, his father, anxious to help someone else who was disadvantaged, bequeathed money to Amy. Rigaud demands ï¿½2,000 to keep silent, but Mrs. Clennam leaves her house for the first time in years to find Amy, reveal the truth, and beg her forgiveness. During her absence, her dilapidated house literally falls apart at the seams and collapses, killing Rigaud. Returning home and discovering the rubble, Mrs. Clennam collapses and dies in the street. When their father’s will is read, the Dorrit children learn they are penniless, since William had invested all his money with Mr. Merdle. Daniel Doyce returns from Russia, where he patented his inventions and made a fortune, and he insists on sharing his wealth with his business partner. Arthur and Amy declare their love for each other and finally, they are united together; some time later, Arthur and Amy are married with their family and friends in attendance.