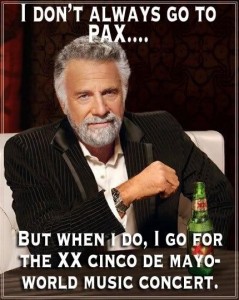 Timothy Brownie via Mexico.Timothy Brownie is organic music with an electronic feel… a mixture of rooftop funk-disco-electro with a dash of Latin rhythms.If the band’s actual history helps you any, here goes. Del Toro met guitarist and theremin player Andres Cruz in Uruguay and the two began playing music together to see what would come of it. They were soon joined by percussionist and keyboardist Gonzalo Sandoval and bassist Mariano Lanus. Later, sax man Javier “Chapa” Cavacini came into the fold, “And that’s where the recipes began to be created,” he concludes.

Santos Y Zurdo direct from Costa Rica is an electronic fusion project based in Costa Rica. Santos Gassiebayle and FernÃ¡n Castro (Zurdo) make up this duo combining the Indian sounds ofthe Sitar with funk and blues mixed in with different electronic beats from a sequencer called a Groovebox including drum and bass, house and others. They have participated in numerous international festivals including Burning Man in Nevada, Moonshine Fest in El Salvador also shows in Guatemala, Nicaragua, Panama and Festivals in Costa Rica