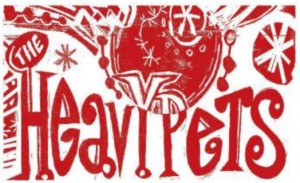 Fresh off their maiden voyage on Jam Cruise 10 and a Colorado run, South Florida’s genre-melding rockers, The Heavy Pets, are returning to The Stage in Miami on Friday, May 11th for the first time since their epic â€œSwim Out Past the Sunâ€ record release party in October. Carefully bending rhythm and blues, jazz-funk and reggae fusion with rock and roll, The Heavy Pets change musical costumes on the fly effortlessly, and their self-titled album and was dubbed a â€œTop 10 Album of 2010â€ by The Huffington Post. On Swim Out Past the Sun (October 2011) THP’s guitar duo set aside their electric axes for a more organic approach. Featuring a three song sit-in by longtime Jerry Garcia collaborator David Grisman, the album presents a fresh perspective from the ever-evolving quintet.

Joining The Heavy Pets are very special guests, The London Souls. The New York-based power trio have been featured in USA Todayâ€™s â€œPlaylistâ€ and have been profiled in the New York Daily News.