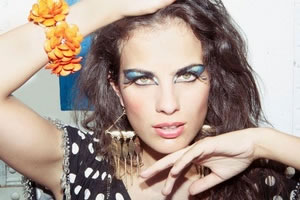 Kali Mutsa is a band from Santiago, Chile . The members consist of French-Chilean actress Celine Reymond and Chilean producer/keyboardist Cristobal Montes who perform respectively under the Kali Mutsa and Sandoje Catiri alter-egos. Their music is an original mix of Andean, gypsy, Bhangra (bollywood) and electronic sounds, along with lyrics in romani (gipsy) and Spanish. Their album, Ambrolina, and lead single, Tunupa, were featured and reviewed by influential music blogs and sites worldwide such as Club Fonograma, Time Out Barcelona, ReMezcla, Sounds and Colours and NPR’s Alt Latino who called Kali Mutsa “(One) of our favorite artists this year”. Since their inception in 2010, Kali Mutsa have performed extensively in their native city of Santiago, Chile as well as in Buenos Aires, Argentina most recently and will be making their US debut at South by Southwest (SXSW) Music Conference and Festival in Austin, TX in March 2012.