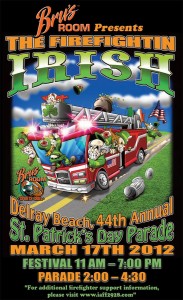 The Delray Beach St. Patrick’s Day Parade is like no other parade in South Florida. The parade is an International Tribute to Fire Fighters from around the world with thousands of Firefighters traveling to Delray Beach to be part of this grand event.
The complete parade route along Atlantic Ave. is decorated at five key points with fire department ladder trucks from multiple fire departments with their ladders extended tip to tip, hanging huge flags that the entire parade will march under.

Uniformed marching firefighters, Dalmation dog owners, and professional fire clowns have been invited to delight the spectators. Civilians and parade sponsors will ride their decorated floats.