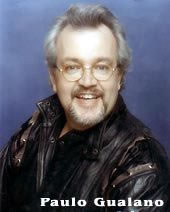 Paulo Gualano and his Brazilian & Latin orchestras and shows have performed for many prestigious companies and important people, such as: