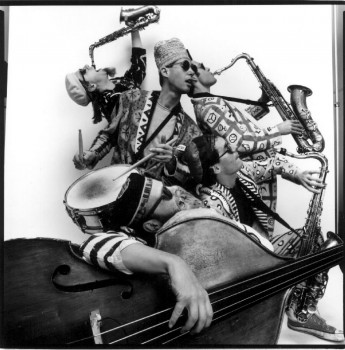 The City of Miami Beach presents the sensational Canadian jazz-rock-fusion band The Shuffle Demons at Sleepless Night, Saturday, November 5, at 10 PM, at the Euclid Circle Stage, Lincoln Road, South Beach. The Shuffle Demons first broke onto the Canadian music scene in 1984 with an electrifying musical fusion that drew in equal measure from Sun Ra, Charles Mingus, Run DMC and the Beastie Boys. The band was one of the first indie acts to break out on MuchMusic. This band was genre-bending, highly visually entertaining, funny, and best of all, could really PLAY. All their eye-catching, crowd-pleasing stunts were backed up by incredibly solid musicianship and real ground-breaking playing.

Over a twenty-six year span The Shuffle Demons have released six CDs, two hit videos, won several music awards, done numerous TV and radio appearances and toured nationally and internationally, including 25 cross-Canada tours, five US tours, 16 European tours, a tour of India, a tour of China, a tour of Thailand, a tour of South Korea and a tour of Cuba, playing on big festival stages, theatres and clubs.

Expect the same exciting, no-holds-barred performances that feature wild romps in the crowd, free jazz moments, danceable funk, poetry, killer solos and more. Tonight the band will be joined by a Special Guest, in from New York: tenor saxophonist and composer Seamus Blake, who is recognized as one of the finest exponents of contemporary jazz. His music is known for its sophistication, bold improvisations and â€œsheer swagger”.