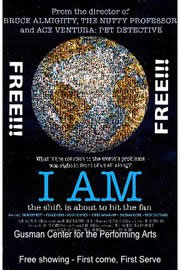 Stop, Breathe and Smile is pleased to present an inspiring evening of community, a free showing of the documentary I AM on Friday, September 23, 2011 at 7:30pm at Gusman Center for the Performing Arts, located at 174 East Flagler Street, Miami, Florida.

Immediately after the showing, there will be a Q and A session with luminary, Coleman Barks (also in the film) and Tom Shadyac, the film’s Writer and Director recently seen on Oprah!

I AM is a prismatic, probing, and utterly engaging non-fiction film that poses two provocative questions: what’s wrong with our world and what we can do to make it better? The filmmaker asking these questions is Tom Shadyac, one of Hollywood’s leading comedy practitioners and the creative force behind such blockbusters as “Ace Ventura,” “Liar Liar,” “The Nutty Professor,” and “Bruce Almighty.” However in I AM, Shadyac steps in front of the camera to recount the story what happened to him after a cycling accident left him incapacitated, possibly for good. Though he ultimately recovered, he emerged a changed man with a new sense of purpose and a new focus. He was determined to investigate how he as an individual, and we as a race, could improve the world we live in and the way we live.

Check out the trailer for the film at www.iamthedoc.com.