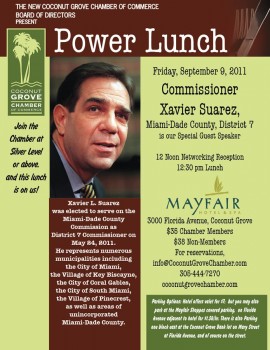 Suarez was first elected Mayor of the City of Miami in 1985 and subsequently re-elected in 1987 and 1989. During his tenure, he worked diligently towards the construction of affordable housing, prioritized community neighborhood improvements and received national praise for his effective handling of civil disturbances. Since 1993, Suarez has focused on practicing law and writing three books, A Unified Theory of God, Mind and Matter, the first, was published in 2005 by AuthorHouse.

Commissioner Suarez was born on May 21, 1949 in Las Villas, Cuba. He has lived in Miami since 1975. Married to Rita Suarez, he is the father of four children, Francis Xavier, Olga Marie, Anna Teresita, and Carolina.